Kraków-Nowa Huta, in the district of Bieńczyce, Obrońców Krzyża Street, a monument set on the wide stairs of Fatima Square at the Church of Our Lady of the Queen of Poland (Lord's Ark).

The two-metre bronze figure of John Paul II stands on a limestone boulder, the whole placed on a small pedestal. The author of the monument presented the Pope in motion as "Wind of Hope". The Pope was depicted with his liturgical robes blown. Therefore, the clergy of Cracow decided to place him on the stairs. The height of all elements of the monument is about 4 m. On the limestone boulder a plaque with an inscription in Polish and Italian. On the pedestal there is a plaque with information about the founder.

The monument "John Paul II - Wind of Hope" is the work of Italian artist Carlo Balljan. It is a gift of gratitude for John Paul II given by the Italians to Cardinal Stanisław Dziwisz. Cardinal Dziwisz dedicated it to the Church of Our Lady Queen of Poland (Lord's Ark) and consecrated it during the unveiling on 16 October 2009. The location of the monument is connected with the activity of Karol Wojtyła, who contributed to the construction of the church in Nowa Huta despite many years of communist bans. On 18 May 1969, as Archbishop of Krakow, he laid the cornerstone from St. Peter's Basilica in the Vatican, consecrated by Pope Paul VI, and on 15 May 1977, he consecrated the church, giving it the call of Our Lady Queen of Poland.

One of 16 monuments of John Paul II in Cracow. Due to its peripheral location in the workers' district, Nowa Huta is rarely visited by tourists and is also rarely recommended in guides. The monument erected in a historical place connected with the activity of Karol Wojtyła is of great importance for the local community. 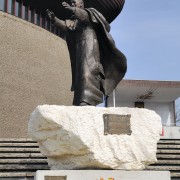