The monument is dedicated to an outstanding chemist and physicist, co-founder of the science of radioactivity, two-time Nobel Prize winner Maria Curie-Skłodowska (1876-1934).

Front: Maria Curie-Skłodowska University of her name and society

on the basis of the statue on the right-hand side the author's signature: Marian Konieczny

A bronze cast figure (4.4 m high), placed on a two-part granite faced pedestal (bottom part 5 x 5 m) with a total height of 4 m. Dressed in a long robe with large, rolled-up sleeves, the scientist stands with her arms lowered, holding the book in her right hand.

The monument is a popular meeting place among students. It is also the central place of an academic town - a complex of university buildings and student houses of the Maria Curie-Skłodowska University, the Catholic University of Lublin and the University of Life Sciences. 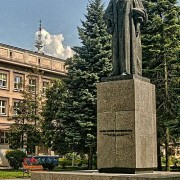