Monument to the Soviet Soldiers in Mikolin

The monument is dedicated to the commemoration of the 425 soldiers of the Soviet Army of the First Ukrainian Front killed 23-30 January 1945, during the forcing of the Oder River from Lipek to Zelazna near Opole.

Mikolin, at the provincial road No. 460 on the Skorogoszcz - Popielów route; on the Oder River, situated in the place where the Oder was forced by Soviet troops at the turn of January and February 1945.

On the front (north) wall of the monument column there is an inscription in Russian: To the heroes - Victors over German-Fascist invaders brave soldiers of the first Ukrainian front. They died while forcing the Odra River in February 1945. First Ukrainian front, 1945.

At the back of the monument (from the south) an inscription in Russian: Eternal fame for the heroes who died in the struggle for freedom and independence of our country).

On the side (eastern) wall of the monument there is a small plaque with an inscription in Russian: It was made by the 39th Unit of Engineering Troops. It was built by the senior lieutenant of Wisniewski W. G. with the active help of the mayor Mieczyslaw Dratwa. April - October 1945.

On a carved high pedestal a monumental obelisk in a boat, topped with a five-pointed star. On the front wall of the pedestal there is a commemorative plaque, a staircase leads to the monument. The whole height is 18.5 m.

The monument was erected between August and October 1945, by a unit of engineering troops of the Red Army stationed in Skorogoszcz. The monument is made of stone, concrete and bricks.

In 2017 the monument was renovated and restored by the Kursk Association, whose aim is to reconstruct/build monuments and cultural attractions in today's Poland. As well as effective assistance to local governments in the care and supervision of various military battle memorials, monuments of military glory and other monuments under the protection of the Polish state. In 2017, the Institute of National Remembrance ordered the demolition of the monument, as a propagation of totalitarianism.

Until 1989, local and provincial authorities, as well as youth and children from nearby schools, placed flowers at the monument on the occasion of various anniversaries, and soldiers of the units of the Northern Group of the Soviet Army from nearby Brzeg - an oath. Currently, it is one of the objects around which there is a dispute over the decommunization of public space. 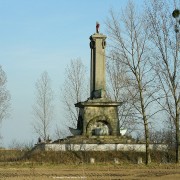 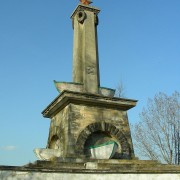