Monument to the Cursed Soldiers in Rzeszów

A monument dedicated to members of the Polish anti-communist underground. Monument commemorating the legendary figure of the wartime and post-war independence conspiracy Colonel Łukasz Ciepliński and his collaborators from the IV Board of the Freedom and Independence Association (Wolność i Niezawisłość): Adam Lazarowicz, Mieczysław Kawalec, Józef Batory, Franciszek Błażej, Józef Rzepka, Karol Chmiel. killed on March 1, 1951.

The monument was erected in the city centre, at the junction of Łukasz Ciepliński Avenue and Moniuszki and Zygmuntowska Streets.

On the pedestal: 'To the Cursed Soldiers'.

On the sculpture of Łukasz Ciepliński there is a short biography of him (at the front): Colonel Łukasz Ciepliński "Plough". Commander of the Inspectorate of AK Rzeszow. President of the IV Main Board of the Freedom and Independence Association. He was murdered from the sentence of the communist court.

And a quote from prison secret messages he sent (on the side): They will only take my life. And that's not the most important thing. I'm glad that I'll be murdered as a Catholic for my faith, as a Pole for an independent and happy Poland. As a man for truth and justice. Today more than ever, I believe that the idea of Christ will win and Poland will regain its independence, and that the disgraced human dignity will be restored. This is my shelter and my great happiness. If you find my grave, you can write these words on it.

On the back, a letter from the founders and emblems of Polish underground organizations.

The busts of the other honoured ones contain short biographies (on the front of the pedestals):

Colonel Adam Lazarowicz "Klamra" 1902-1951, Commander of Dębica AK District. Deputy President of the Fourth Main Board of the Freedom Association Independence Assassinated by the Communist court.

Colonel Mieczyslaw Kawalec "Żbik" 1916-1951, Head of the Information Department of the IV Main Board of the Freedom Association Independence. Murdered by the communist court.

Major Franciszek Błażej 1907-1951, Inspectorate Officer of the Rzeszów Home Army, President of the Southern Area of the Freedom and Independence Association. Assassinated by the communist court.

Major Józef Rzepka "Znicz" 1913-1951. Officer of the AK Rzeszów District. Head of the Political Department of the IV Main Board of the Freedom and Independence Association. Murdered by the communist court.

Captain Karol Chmiel "Zygmunt" 1911-1951 Officer of the AK of Debica District. Political Advisor to the President of the Fourth Board of the Freedom Association Independence. Murdered by the communist court.

The monument consists of several coexisting elements The main element of the whole monument is a 3-metre high sculpture placed on its right side, depicting Łukasz Ciepliński cast in bronze, shown behind prison bars, with the signature "Cursed Soldiers". To the left of the sculpture are placed on the pedestals of the busts of members of the IV WiN Board: Adam Lazarowicz, Mieczysław Kawalec, Józef Batory, Franciszek Błażej, Józef Rzepka and Karol Chmiel, who were deprived of their lives in the execution on March 1, 1951, as well as the symbols of the Home Army, WiN, Fighting Poland - next to the three-meter tall figure of Colonel Ciepliński, a cast of a fluke written by Ciepliński in prison.

The monument plays an important role in the process of restoring the memory of Cursed Soldiers. It is the oldest monument dedicated to this subject. Since 2011, on the anniversary of the murder of the leaders of the IV WiN Board on March 1, a Polish national holiday called the National Day of Remembrance of the Cursed Soldiers, commemorating Polish activists of the anti-communist underground, is celebrated. One of the most important monuments unveiled in Poland in the 21st century. 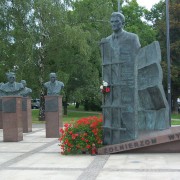