Monument to the Heroes of Monte Cassino

The monument is dedicated to the soldiers of the 2nd Polish Corps commanded by General Władysław Anders, who took part in breaking the Gustaw Line and captured the monastery at Monte Cassino. They took part in one of the most famous battles of World War II.

The monument stands in the Konstantynów district, on the square at Bohaterów Monte Cassino Street, near a footbridge and a two-lane road, near Armii Krajowej Street.

Passer-by, tell Poland that we died faithful in her service

For our freedom and yours, we, Polish soldiers, have given our spirit to God, our body to Italian soil and our heart to Poland.

The people of Lublin

The monument, measuring about 4 m high, was made of the hardest variety of light-golden sandstone available in Poland. At the top of the pedestal there is an eagle with magnificent, hussar wings, 160 cm high. It is a copy of one of the two eagles, which are located at the entrance to the Italian cemetery, where Polish soldiers fallen in the battle of Monte Cassino are resting.

The initiator of the monument was Kazimierz Kosicki, an resident of Konstantynów district. First, in 2013, he collected over half a thousand signatures under a petition to the district council. After it was handed over, the council supported the application to build the monument and sent it to the City Council and the Provincial Committee of the Council for the Protection of the Memory of Combat and Martyrdom. At that time, Kazimierz Kosicki gathered 50 thousand zlotys among the residents of Konstantynów district, local businessmen and politicians to build the monument. His project was carried out by Witold Marcewicz. The work of the sculptor and at the same time a stonemason from Bełżyc aroused numerous controversies. A special committee established by the Lublin City Council, composed of representatives of the Association of Polish Architects, the Association of Polish Town Planners and the Spatial Culture Council, demanded a change in the design. It was accused of being a plagiarism of the sculpture by the Italian artist Duilio Cambelotti, which stands by the cemetery where the soldiers who fell at the battle of Monte Cassino are resting. However, the councillors, under pressure from the Organisational Committee for the Construction of a Monument to the Heroes of Monte Cassino, rejected the committee's opposition. Nothing was changed in the project and Witold Marcewicz forged the monument. It was unveiled on 18 May 2015, on the 71st anniversary of the end of the Battle of Monte Cassino and on the 45th anniversary of the death of General Władysław Anders. Before the main ceremonies, a mass for the intention of soldiers of the 2nd Polish Corps was held.

On each anniversary of the Battle of Monte Cassino, a delegation from the Provincial Office puts a wreath at the monument and an appeal is held for the fallen accompanied by the army. Four years after the unveiling of the monument, on the occasion of the 75th anniversary of the Battle of Monte Cassino, the still active Organisational Committee for the Construction of the Monument organized a ceremony, which, as during the unveiling of the monument, was preceded by a mass for the intention of soldiers of the 2nd Polish Corps. Afterwards, the choir sang patriotic songs "Soldiers of September 1939". The ceremony ended with the laying of flowers and lighting candles.

The initiator of creating the monument, Kazimierz Kosicki, claimed in his statements to the media that the monument is intended to preserve the memory of an important event in the history of the Polish nation, which was the Battle of Monte Cassino, and to pass it on to future generations. The dispute that the monument aroused was paradoxically conducive to this goal, because its creation did not go unnoticed. However, it cannot be said that the monument to the Heroes of Monte Cassino became a tourist attraction of the city. 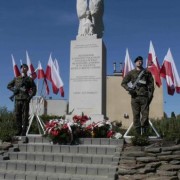