The monument is dedicated to Cardinal Stefan Wyszyński - the Primate of Poland. The "Primate of the Millennium" in the Cathedral in Włocławek was ordained a priest on 3 August 1924. Then he was a lecturer and rector of the Włocławek seminary, diocesan bishop of Lublin, archbishop of Gniezno and Warsaw and Primate of Poland.

The monument is located between the Cathedral Basilica of the Assumption of the Blessed Virgin Mary and the Higher Seminary.

The whole-shaped monument was cast in bronze, measuring 3.5 m high and depicting Cardinal Wyszyński standing in a cassock. It has a birette with four protruding corners on its head, usually worn as part of a liturgical costume. On the chest there is a cross hanging on a chain. On his left hand, behind which a bouquet of roses is placed, rests his right. The sculpture is placed on a pedestal made of red marble, under which there is a two-stage pedestal. On the pedestal, just above the inscription, there is Cardinal Wyszyński's coat of arms.

In the mid-1990s, the idea of commemorating Cardinal Wyszyński appeared among clergy from the Diocese of Włocławek. It was in Włocławek that Wyszyński attended secondary school, entered the seminary and worked in the diocese. The diocesan bishop Bronislaw Dembowski was very interested in the creation of the monument. It was him who took on the role of animator of the whole undertaking. He entrusted the preparation of the project to the Poznań sculptor Stanisław Mystek. It was also ensured that the location of the monument brought with it as much content as possible related to the person of the Primate of the Millennium. It was decided to place the monument between the cathedral, where Wyszyński was ordained priest in 1924, and the seminary, where he studied and later was teaching himself. When it was erected, the square around it was lined with slabs, laying cross-shaped pavements. The statue of Wyszyński was solemnly unveiled and consecrated on 12 May 1996 by the Polish Primate Cardinal Józef Glemp. This was done on the 50th anniversary of the Primate's acceptance of the bishop's sacrament. The ceremony was attended by students from Cardinal Stefan Wyszyński Primary School No. 23 in Włocławek.

The Wloclawek statue of Cardinal Wyszynski has blended well into Nicolaus Copernicus Square, becoming its permanent element. On the occasion of anniversaries associated with the Primate of the Millennium, local celebrations are held there. Such as on the 30th anniversary of the Cardinal's death on 28 May 2011. After the concelebrated mass, students from Primary School No. 23 in Włocławek prepared a verbal-musical montage based on the 'Decalogue of Cardinal Stefan Wyszyński' written by the Primate of the Millennium.

The statue of Cardinal Stefan Wyszyński commemorates the relationship between one of the most prominent Polish Catholic Church hierarchs and Włocławek. It serves to build the local pride of the inhabitants of his town, as well as to cultivate the memory of the Primate of the Millennium, who played a significant role in Polish history. The monument is mentioned in tourist guides to the Kujawsko-Pomorskie Province. 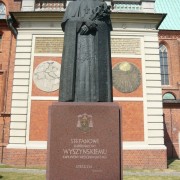