It commemorates an Italian colonel, fighting alongside Giuseppe Garibaldi, the commander of Italian volunteers, the so-called Garibaldians, who took part in the January Rising (1863-1864).

The monument was located on Frascati Street, at the exit of Francesca Nulla Street, on the square of Home Army battalion "Miłosz", surrounded by trees and urban greenery.

The inscription on the front of the plinth: Francesco Nullo

The inscription on the back of the plinth: Born in Bergamo on March 11, 1826. Garibaldian. Fighter for the independence and unification of Italy. He fought for the freedom of Poland in the January Rising and died in the battle of Krzykawka on 5 May 1863.

The gift of the city of Bergamo to the capital city of Warsaw. Work of art of sculpture. Gianni Remuzzi.

On a granite pedestal measuring 171 cm in height there is an approx. 120 cm high Nullo bust made of bronze. It has a lush beard and a characteristic, impressive mustache. His head and eyesight are directed to the right. With his right hand he is holding his coat on his shoulder.

After becoming the ambassador of the Second Republic of Poland in Rome, Gen. Boleslaw Wieniawa-Dlugoszowski strived for political rapprochement between Poland and Italy. The Minister of Foreign Affairs of that country, Count Galeazzo Ciano, was very kind to this. At the beginning of 1939, Benito Mussolini's son-in-law decided to visit Poland for a week. It was to begin with a symbolic emphasis on the cordial relations of both countries. The ceremonial unveiling of the monument to Colonel Francesco Nullo in Warsaw on 26 February 1939 served this purpose. The pedestal was made by the Italian sculptor Gianni Remuzzi on behalf of the authorities of Bergamo, where Nullo was born. Being already a famous hero of the wars for the reunification of Italy, he left Bergamo to lead a unit of Italian volunteers in the January Rising. That is why the unveiling of the monument, apart from General Wieniawa-Długiszowski, Count Ciano and his wife, was attended by Mayor Carillo Pesenta Pigna. He represented the residents of Bergamo, who funded the pedestal with voluntary contributions.

During World War II, the Francesco Nullo monument was slightly damaged. After the renovation, which was carried out in Chojnacki's bronzing company, it returned to its place in 1949. Occasional ceremonies are held at the monument, during which officials representing the Polish state and Italy are present. In 2018, on the 192nd anniversary of Nullo's birthday, he was commemorated by a wreath-laying ceremony attended by representatives of the city of Warsaw and the Ambassador of the Italian Republic to Poland, Allessandro de Pedys.

The monument to Colonel Francesco Nullo commemorates the figure of the commander of a unit of Italian volunteers, the so-called Garybalds, who joined the January Rising. Recalling this episode has a symbolic meaning for both Poles and Italians. In the history of Poland the January Rising played a significant role and the fact that representatives of other nations also took part in it arouses sympathy for those nations, facilitating mutual relations. The Italians are proud to recognize the appeal of their national hero Giuseppe Garibaldi: "Don't leave Poland", so many Italians have answered, declaring their desire to fight in the uprising. They wanted to repay for the participation of Poles in the wars of Italian unification. In such a context, the monument to Colonel Francesco Nullo plays the role of a place of remembrance to maintain friendly contacts between Poland and Italy. However, although it is present in tourist guides, it is not a major attraction for people visiting the capital. 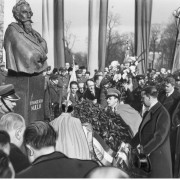 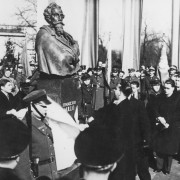 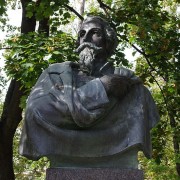 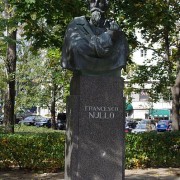