The monument is dedicated to Nicolaus Copernicus (1473-1543), an outstanding astronomer, author of the heliocentric theory.

The monument stands at the intersection of streets in the Old Town, near the main gate of the Museum of Warmia and Mazury.

The figure of Copernicus cast in bronze (about 2 m high) sits on a wall about 2 m wide. The astronomer holds an astrolabe in his right hand and a roll of paper in his left hand.

The monument designed by Urszula Szmyt was unveiled on 31 October 2003, the ceremony was one of the elements of the celebration of the 650th anniversary of granting Olsztyn city rights. The unveiling was performed by the Mayor of the town Jerzy Małkowski together with the honorary citizen Georg Dietrich, the consecration was made by Archbishop Edmund Piszcz. A debate on the location of the monument was held earlier.

The monument commemorates an outstanding Polish astronomer who lived in Olsztyn for several years (1516-1519 and 1520-1521). It serves, among other things, to emphasize his relationship with the city, which is important in view of the fact that Copernicus is generally associated with Toruń. The monument is also a tourist attraction, its form often makes tourists sit next to the sculpture in order to take a commemorative photograph. 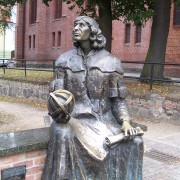