Monument to the Victims of Communist Terroror

The monument is dedicated to the soldiers of the independence underground and civilians from the Ostroleka region who died at the hands of communists in 1944-1954.

The monument stands on a square in one of the main streets.

To the memory of Home Army Soldiers, the Freedom and Independence Association, The National Armed Forces, the National Military Union and the civilians who died at the hands of the Communists in the Ostroleka Region in 1944-1954. They gave their lives for Polish Independence Catholic Faith and Human Freedom

The main part of the monument is a stone obelisk with a height of about 4.5 m, to which the most important plaque with an inscription was attached. At the top of the obelisk there is a bronze cast eagle with wings spread. The obelisk is surrounded by cross-shaped stone plaques of various sizes with the names of the victims and the date of their death.

The unveiling ceremony of the monument took place on October 24th 2008, attended by the President of the Republic of Poland Lech Kaczyński, the city authorities and the families of the victims. After the President's death, the square where the monument stands was named after him. The main initiator of the monument was the 'We remember' Foundation, which works to commemorate the soldiers of the anti-communist underground.

During the period of installation of communist power on the territory of Poland since 1944, there was a process of liquidation of all opposition and resistance. The victims of terror were soldiers of the post-war independence underground (popularly known as the Cursed Soldiers), as well as civilians, who were real or alleged opponents of the communist system. Only after 1989 and the political changes in Poland could they be properly honored and commemorated. Moreover, for several years now, there has been a strong trend in Poland to commemorate the Cursed Soldiers. In 2011, the National Remembrance Day of the Cursed Soldiers (March 1) was established. Cultivating the memory of soldiers and other victims of the communist system is primarily aimed at emphasizing the opposition of Poles to the regime imposed by force after the war and the lack of consent to make Poland dependent on the USSR. At the monument, ceremonies are held to commemorate the National Remembrance Day of the Cursed Soldiers (March 1), and the date of the Soviet aggression against Poland (September 17, 1939).  The ceremonies are usually attended by, among others, representatives of local authorities, veteran, labor union and non-governmental organizations, and on March 1, 2019, the Prime Minister of the Republic of Poland Mateusz Morawiecki took part in the ceremonies on the occasion of the National Remembrance Day of the Cursed Soldiers. 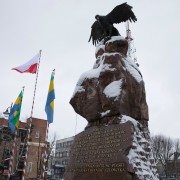