Execution Cross of the January Insurgents

The monument is dedicated to the January insurgents executed in Radom by the tsarist authorities in the years 1863-1864.

The monument stands in the street, near a multi-family house in the Obozisko housing estate.

Glory to the Heroes

A metal cross of openwork construction erected on a concrete plinth in the shape of a four-stage pyramid. On the pedestal there is a metal plate with an inscription and the National Government emblem from the January Uprising. The cross is about 3 m. high, the plinth about 1 m.

In 1795. Poland was taken off the maps and its territory was divided between three partitioners (Russia, Austria, Prussia). In January 1863, the Poles began another uprising against tsarist Russia (the so-called January Uprising), which finally failed in 1864. The Cross was erected on the 70th anniversary of the outbreak of the uprising, in 1933 on the site of another - wooden - cross erected in 1916. In this place there used to be a fence of military barracks, under which the Russians carried out executions. The monument was in line with the then tendency to commemorate and honour the last living insurgents. The shape of the monument resembled the distinction for the participants of the uprising established in 1933.

Even before Poland regained its independence in 1918, the cross became a place of patriotic celebrations attended by the inhabitants, among others on the day of the announcement of Act 5 November 1916. In the period 1918-1939 it was an important place of remembrance of the January insurgents. After 1945 the monument fell into oblivion and was gradually devastated. It was only the 150th anniversary of the January Uprising (2013) that made the monument more important for the inhabitants.

The monument plays an important role as a venue for local patriotic celebrations organized in the city, especially on the anniversaries of the outbreak of the January Uprising (starting from 2013). It is attended by, among others, students, members of local associations, delegations of the city authorities. As a result of the monument's growing importance and its symbolism, a fundraising campaign was initiated to finance the monument's thorough renovation. It was finally completed in 2018. On 30 October 2018, an important ceremony was held during which Bishop Piotr Turzyński consecrated the renovated monument. 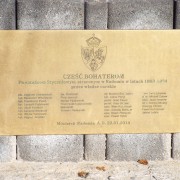 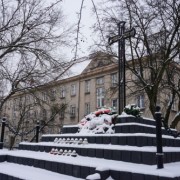 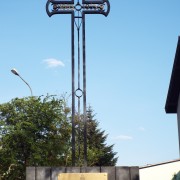