Monument to the Fighters for the Polishness of Warmia and Mazury

The monument was dedicated to Polish activists working for the benefit of Polishness of Warmia and Mazury murdered by the Germans during the World War II.

To the heroes who died for the Polishness of Masuria and Warmia. Grateful Compatriots 1966.

The monument measured about 4 m. Its main part was a four-walled spire, on which boards with inscriptions were mounted. At its base there was a small fountain supported by four columns.

After Poland regained its independence in 1918. Warmia and Mazury were the subject of territorial disputes between Poland and Germany. Eventually, most of this area was annexed to Germany as a result of a plebiscite. After World War II, however, it fell to Poland. The idea of erecting a monument to people who had contributed to the struggle for the Polish identity of Masuria and Warmia, appeared just after Olsztyn was incorporated into Poland. The monument commemorated earlier German economic activist Herman Schultze-Delitzsch. In 1946 the German inscriptions and the image of the German were removed. In their place, plaques commemorating the murdered Polish activists were installed.

The monument was supposed to remind of Polish activists from this area, which served to emphasize the earlier existence of the Polish element on lands taken away from the Germans.  In 1966 the obelisk was removed as a special plaque dedicated to the fighters was placed on the wall of Olsztyn Castle.

the monument does not exist 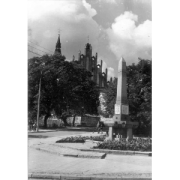