The monument was dedicated to Bolesław Bierut, President of Poland (1947-1952) and First Secretary of the Central Committee of the Polish United Workers' Party (1948-1956).

The monument stood on a large square near the roundabout, on Bieruta Square.

The figure of Bierut stands on a pedestal (total height 8.5 m.) against the background of a screen standing on two 4.75 m high plinths. The Bierut is depicted in a long coat, in his left hand he holds a sheet with the inscription "Manifesto of the Polish Committee of National Liberation", the right one is slightly extended to the back. In the middle part of the screen the shape of an eagle is marked. The whole is cast in bronze. At the base of the screen there is an inscription: Bolesław Bierut.

The winner of the competition to design the monument was Bronisław Kubica. The monument was unveiled on 19 July 1979 with the participation of the First Secretary of the Central Committee of the Polish United Workers' Party (KC PZPR) Edward Gierek, the Bierut family and representatives of local party and state authorities. The date of the ceremony was connected with the National Day of Poland's Rebirth - 22 July, which was the official anniversary of the announcement of the Manifesto of the Polish Committee for National Liberation in 1944 in Lublin. The monument was unveiled on the 35th anniversary of this event.

Before 1956, Poland was a cult of the unit, whose objects were Bierut and Stalin.  After the thaw of 1956, Bierut was no longer a particularly honoured and commemorated figure, and was associated primarily with the brutal Stalinisation of Poland, a period with which successive ruling crews did not want to identify themselves. The Lublin monument was one of the few forms of commemoration of Bierut in the following decades after 1956, and so monumental. It can be assumed that the monument was to emphasize Lublin's special contribution to the process of introducing communism in Poland, as Bierut spent many years in this town and began his political career. Moreover, the monument and the ceremony of its unveiling strongly referred to the 1944 PKWN Manifesto and the existence of the Lublin Poland (in the period 1944-1945, in the area liberated from German occupation, Lublin was the central administrative centre and seat of the PWKN). The monument did not play a special role, even the celebrations of 22 July took place in other places. In 1989 the monument was dismantled by decision of the Municipal National Council. 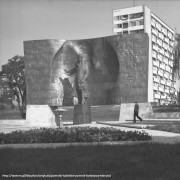