Monument to the Victims of the Katyn Massacre

The monument in memory of Polish army officers, policemen and other prisoners of war murdered by the Soviets during World War II.

The monument is located in a city park, at one of the main and most frequently visited alleys.

In the spring of 1940, Stalin ordered the assassination of 22 thousand Polish officers, policemen and other prisoners of war from the Kozielsk, Ostaszek, Starobelsk camps in Katyn, Miednoye, Kharkiv and unknown places of the former USSR with a shot in the back of his head. In memory of the murdered, on the initiative of the ‘Lower Silesian Katyn Family’ association, this monument was founded by the countrymen. Wrocław, 1999.

The monument is situated on a cross plan. It has the form of four granite slabs and two bronze figures. Four pedestals form a symbolic tomb. In the centre of the tomb, on a symbolic grave, there is a sculpture of Pieta Katynska depicted as Mother - Homeland, mourning the murdered sons. Above the whole rises the highest pedestal with the sculpture of the Angel of Death. Total area of the monument: 380 m2, highest object: 7 m.

The monument is the place where official local ceremonies commemorating the Katyn Massacre take place. A place permanently inscribed in the local memory of the presented event. Monument present in tourist guides and programmes of part of excursions through the city of Wrocław. 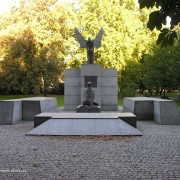 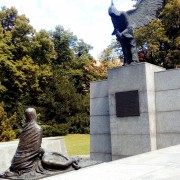