The monument in memory of Chinese people who protested and were murdered by Chinese army on the Tiananmen Square in spring 1989.

The monument is located on the lawn next to a pedestrian crossing that leading to tram stop.

Here, after the bloody quashing of the Tienanmen Square protests in Beijing, on the 4th of June 1989, young people of Wrocław organized the Camp of Living Protest. The week-long campaign was crowned with the unveiling of the Victims of Chinese Communist regime” memorial. Two days later the Polish Communist Government, despite having lost the elections, had the memorial removed. The current one is a replica, made in 1999.

The monument is in the form of a rectangular slab with cobblestone, on which lies an overturned bicycle, which is pressed into the cobblestones; a clear trace of a tank caterpillar leads through the cobblestones, and spilled red paint spots symbolize the blood of the massacre victims.

After the massacre in Pekin, on the 4th June 1989 a Wroclaw group of opposition organized the Camp of Living Protest on the Dominikański Square. The manifestation was ended on the 16th June 1989 and this day the monument, created by Igor Wójcik and Joanna Czarnecka, was unveiled.

The violence, which afflicted Chinese, was occasion for Polish to pay attention to own problems which were connected with end of communism. Day after the monument was unveiled, it was destroyed and removed by unknown causers (probably by members of the Security Service). Ten years later (in 1999) Leszek Budrewicz, former opposition member, journalist, initiated an idea of reconstruction of the monument. At the same place they put up a replica created by Marek Stanielewicz.

Although the monument was put up to memorialize murdered Chinese and to pay attention to polish incidents, today it is forgotten. People who are hurrying up to trams and buses don’t notice this memorial. There do not take place any ceremonies and events here. The monument is presented in some of the tourist guides. 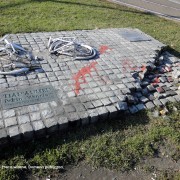 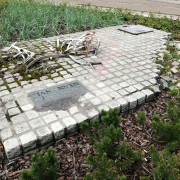 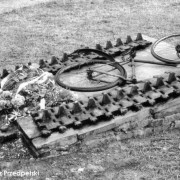