Dietrich Bonhoeffer (1906-1945) was a Protestant theologian who openly opposed the Nazi authorities, becoming one of the key figures of the so-called Confessing Church - in opposition to the pro-Hitlerian Reich Church. He was also involved in the activities of the anti-Nazi opposition, working closely, among others, with Admiral Canaris. For which he was arrested and imprisoned in the camp. On Hitler's personal order, on 9 April 1945 he was executed.

Situated on the square by the church of St. Elizabeth, right next to the market square in Wroclaw. It is perfectly visible.

Dietrich Bonhoeffer was born on February 4, 1906 in Wroclaw, an Evangelical theologian priest, a member of the German resistance against National Socialism, advocate of ecumenism and martyr. For the Christian faith he was murdered in the concentration camp in Flo Enburg on 9 April 1945.

The monument depicts a headless torso turning into an anthropomorphic cross. In front of the monument, there are two plaques in Polish and German on the ground. The monument is located on a stone pedestal, in the shape of a circle. The monument is made of bronze. Height about 150cm.

The Wrocław monument is a twin copy of a monument from Berlin.

The monument to Bonhoeffer in Berlin was erected in front of the church of Zion (Zionkirche), where Bonhoeffer was a vicar for some time. The monument was designed by sculptor Karl Biedermann and unveiled in 1997. The initiative to erect a twin monument in Wroclaw, Bonhoeffer's hometown was taken by the Bonhoeffer Society under the direction of Janusz Witt. This idea met with the support of the city authorities, who are trying to commemorate the multicultural and multinational history of Wrocław. The monument was ceremonially unveiled on 24 April 1999 in front of the Church of St. Elizabeth.

Bonhoeffer became particularly famous in Poland after 1970, when Anna Morawska's book "Christian in the Third Reich" was published. Based on the example of Dietrich Bonhoeffer's life, she described the Christian opposition to Nazism and inspired some representatives of the Polish anti-communist opposition. Bonhoeffer's concept of "religionless Christianity" met with interest of many Polish intellectuals. Bonhoeffer's history and theological thought is particularly nurtured in Wrocław, his hometown, by circles associated with the promotion of local history, theologians and philosophers, as well as strong protestant community in the city. The monument is a place of regular ceremonies organized by various independent organizations working to commemorate the multicultural history of Wroclaw. It is also present in guides and tour routes. 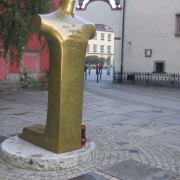 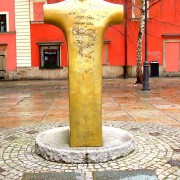