Monument to the 'Olympus' Organization

The monument is dedicated to fallen members of the "Olimp" organization. It was an organization founded in 1941 in German Breslau. It involved members of the local Polish community and people from Wielkopolska (part of Poland incorporated by Third Reich in 1939) who were forced labourers in Breslau. They helped Polish workers, collected intelligence information and organized sabotage actions. The organization was broken up in 1942 and its management was sent to concentration camps.

It's right by the sidewalk, by the Resistance Square "Olympus".

Between 1941 and 1942, members of the Polish Resistance Movement OLIMP gathered in a house at the intersection of Sokolnicza and Zelwerowicz streets in conspiracy. For the Polish city of Wroclaw gave their lives the Poles under the sign 'RODLA' and the Poles under the sign of the letter 'P', transported to forced labour. Friends your life sacrifice was not in vain WROCŁAW FOREVER POLISH.

On the monument there is a tombstone with the names of the fallen.

The monument shows three granite cubes. On the highest central cube there is a board with a white eagle and an inscription. The other two lower ones are decorated with the sign of the "rodlo". (before the World War II used by the Union of Poles in Germany) and the letter "P" (Polish forced labourers in Germany). Between them are two monuments with plaques commemorating the murdered.

The monument commemorating the "Olympus" organization was unveiled in 1989. It was erected in the place where before the war the tenement house where the members of the organization gathered was located (then Jahnstrasse 19). The author of the monument is Janusz Kucharski.

In 2005, the Szczepin Housing Estate Council placed the monument under its care, commissioning cleaning and conservation works to restore it to its former appearance.

At the monument, local patriotic ceremonies are organized every year, commemorating the pre-war German Polish community and the forced workers deported to Germany during the war. It is present in city guides and is often visited during patriotic-educational events. 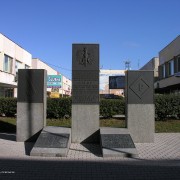 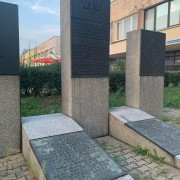