The monument is located on the boulevard adjacent to the Blessed Virgin Mary Church in Piasek, in front of the entrance to Ostrów Tumski, in a specially prepared space resembling an amphitheatre. It is perfectly visible.

...we forgive and ask for forgiveness. (in Polsh and German)

The monument shows the figure of the cardinal, in liturgical robes, holding a dove in his hand - symbolizing the dove of peace. The figure stands on a wide, flat base on which the inscriptions are placed: "Cardinal Boleslaw Kominek 1903-1974" and "...We forgive and ask for forgiveness ...We vergeben und bitten um Vergebung". The monument is made of bronze. It is 434 cm high.

The World War II and the atrocities committed by the Germans against the Polish population, causing the deaths of over 5 million people, cast a shadow over the relationship between Poles and Germans for many years. Paradoxically, however, for a significant part of the society of post-war (Werstern) Germany, Poland was seen not as a victim of the war, but (completly wrongly) as a country responsible for the mass expulsions of the German population and the illegal occupation of a large part of the land (by Polish propaganda called Recovered Lands, by West German Lost Lands) - which was further emphasized by the fact that the German authorities did not want to recognize the western borders of Poland. Not without significance was also the attitude of Polish communist authorities, which wanted to fuel the Polish-German antagonism, because they recognized that the fear of another German aggression will make Polish society more willing to accept the alliance with Soviet Russia - supposed to be the guarantor of Polish security. This created a very difficult situation, which made dialogue between politicians and citizens of both countries practically impossible.

In 1965, on the initiative of Bishop Boleslaw Kominek, the Polish bishops addressed a letter to the German Episcopate, which was the first initiative of this rank, aimed at resolving the Polish-German conflict. In that letter the words "(...) we forgive and ask for forgiveness" were used as a crucial gesture which was to become the basis for the Polish-German reconciliation - symbolically accomplished in November 1989, during the Reconciliation Mass in Krzyżowa.

The monument to Cardinal Kominek was created on the initiative of Rafał Dutkiewicz, Mayor of Wrocław and was unveiled on 5 December 2005, on the 40th anniversary of the letter of Polish bishops to the German bishops. The author of the monument is Sławoj Ostrowski.

Originally there was a quotation from the bishops' letter "We forgive and ask for forgiveness" only in Polish. On the initiative of Professor Norman Davies, a German-language version of the quote was added shortly after the unveiling of the monument.

The letter, created on the initiative of Cardinal Kominek, is currently being evaluated as a milestone document, putting it as one of the foundations of a united Europe. Therefore, the promotion of the memory of its initiator is very strong in Wrocław, which results in interest in the monument. The local celebrations take place on the anniversary of the Bishops' Letter (December 5). 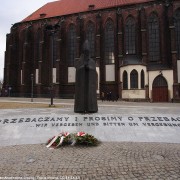 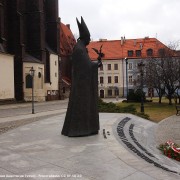 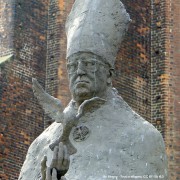