Monument to the Heores from 15 November 1987

The monument is dedicated to the uprising of 15 November 1987 from Braşov.

On 15 November 1987, during communist period, thousands of workers from the Steagul Roşu factory in Braşov revolted against the regime due to the low salaries, but also due to the poor living conditions which followed the austerity measures imposed by Ceauşescu (rations for heating, electricity, warm water, food, etc.). The uprising of workers in Braşov was repressed by the intervention of the troops of the Securitate. Following these events, over 500 people underwent investigations and 61 people were convicted.

The monument lies next to the Emergency Hospital of Braşov, at the intersection of Calea Bucureşti and streets Carpaţilor and Aurelian.

This holy monument was built to honour the people of Brașov who sang the national anthem 'Deșteaptă-te, române!' (Awaken, Romanians!) on this spot on 15 November 1987, overcoming their fear and despising death.

The monument is formed of a wooden cross depicting Jesus being crucified. The cross is placed on a plinth coated in marble. Built above street level, the monument can be reached by climbing 10 steps.

The initiative to build a monument for the Uprising of 15 November 1987 came from the '15 November 1987' Association, whose members are the workers who had participated in the uprising. It was unveiled on 15 November 1997, 10 years after the events. The place where it now lies, close to the County Hospital, was not chosen at random. In November 1987, the workers having participated in the uprising stopped in this place and yelled 'Down with Communism!' and 'Down with Ceauşescu!' and sang 'Deșteaptă-te, române!', a song which had been prohibited during communism period and which became the national anthem of Romania after 1989.

Every year, on November 15, this monument hosts commemoration ceremonies for the events of 1987, including a religious sermon and wreath ceremonies. The '15 November 1987' cross race is organized each year in November and the monument is one of the main landmarks on the participants' route. 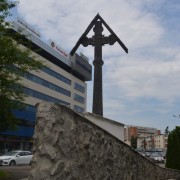 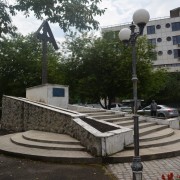 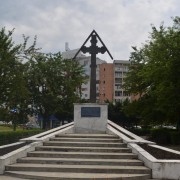 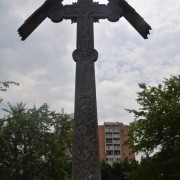 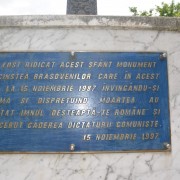 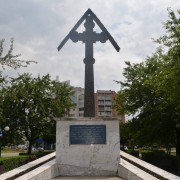