Elie Wiesel (born on 30 September 1928, in Sighetu Marmației, Romania, died on 2 July 2016, in the USA.) was a writer, essayist and humanist philosopher, a human rights activist, born in a Jewish family from Romania, survivor of the Holocaust. In 1986 he received the Peace Nobel Prize.

The bust is made of bronze and measures approx. 80 cm; it sits on a marble pedestal which bears the inscription 'A single man of integrity can make a difference' in Romanian, Hebrew, English and French. Sculptor Ioan Ladea.

The statue was unveiled two years after the death of the writer, in May 2018, marking 74 years since the deportation of Jews from Sighet and Maramureș.

The bust of Elie Wiesel is placed in the yard of the Elie Wiesel Memorial House, which was specially designed as a place of rest and meditation. The museum pays homage to the great writer through antique furniture, paintings (which belonged to Jewish families in Sighet). This place renders the atmosphere of the era when Elie Wiesel was a child, as well as elements of the Jewish community, such as photos, documents, personal objects and other testimonies; it also shows how ghettos were made and their consequence, the great tragedy of deporting the Jewish community from Sighet and Maramureş. The second room focuses on the personality of Elie Wiesel through his work (over 30 volumes).

Place of annual pilgrimage and meditation in May, for the commemoration of deportations from Sighet. 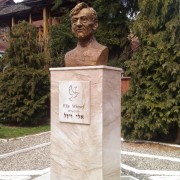 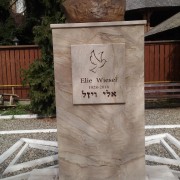 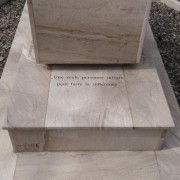