Cross on the Citadel Hill

The monument lies on the Cetăţuia hill (Citadel hill), on the southern side of the former Habsburg fortress, close to the Belvedere hotel, a massive building visible from many areas of the city.

TO THE HEROES OF THE PEOPLE

The Cross on Citadel Hill was designed by architect Virgil Salvanu, on the hill called Cetățuia in Cluj-Napoca  and it has a height of almost 23 meters, weighing over 60 tonnes. The lower side of the monument symbolizes a typical house from the area of Ardeal (Transylvania) from which rises a stainless steel cross reflecting the sky. It is composed of two blades on each side, forming two smaller crosses.

This monument to the Heroes of the People was unveiled and blessed on 1 December 1997 by His Eminence Bartolomeu Anania and His Eminence George Guțiu. It was built on the same spot as the cross destroyed during Communism in the 1950’s, which had initially been built in memory of those imprisoned there.

The Cross was erected on the same spot as the oak cross built between 1936 and 1937 through the efforts of Greek-Catholic bishop Iuliu Hossu  and Minister Valer Pop, a cross which was blasted with dynamite by Communist order in 1948.  The original cross had been built in memory of those imprisoned in this dreaded fortress.

Nowadays, Cetățuia is without a doubt one of the most frequently visited tourist spots in Cluj, both for its historic value and for the panorama that welcomes one when reaching the top of the hill. 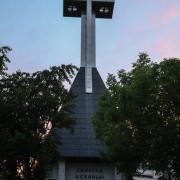 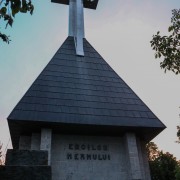