Cortege of the Sacrificial Victims

In the memory of the political prisoners from the communist period.

The ensemble is located in the second courtyard of the The Memorial to the Victims of Communism, which is in the city center of Sighetu Maramţiei.

The ensemble 'Cortege of the Sacrificial Victims' is a representative work of art, in its essence is a research upon the human gesture determined by suffering, which highlights the uncertanty and fragility of our destiny. The Cortege of the Sacrificial Victims is a large scale work of. The group is made up of eighteen human figures walking towards a wall that shuts off the horizon, just as communism barred the way to millions of human lives.  First presented in wood in 1997, the work was cast in bronze the following year and is today sited in an inner courtyard of the former prison.  It is a favourite spot where hundreds of thousands of visitors take photographs as they pass through the Memorial.

It is placed in the courtyard of the The Memorial to the Victims of Communism in Sighet, its a tribute to the victims of the communist regime. The ensemble 'Cortege of the Sacrificial Victims' was realized by the sculptor Aurel Vlad. In 1997 the initial version was presented made out of wood, inside the museum. In 1998 the bronze variant of the 18 human figures was placed in the courtyard of the former prison. 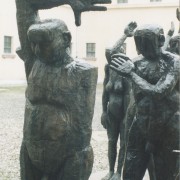 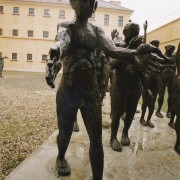 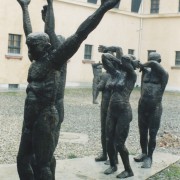 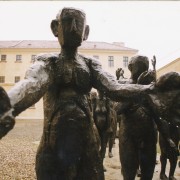 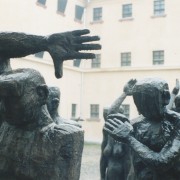 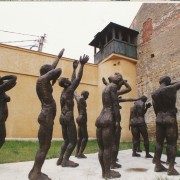