Statue of the two Bolyai

The monument lies in a central area of Târgu Mureș, close to the Bolyai Museum.

The statue is placed on a marble pedestal approximately 1 meter high and about 2 meters wide; the bronze statue is 2 meters high.

The monument was unveiled in the central area of the town Târgu Mureș on 8 September 1957, on the 400 year anniversary of the Reformed Church College where mathematicians Farkas Bolyai and his son, János Bolyai, taught and developed non-Euclidean geometry. It is the work of sculptors István Csorvássy and Márton Izsák.

Nowadays the monument serves as location for wreath ceremonies; Hungarian Science Day has been celebrated here, with international participation, since 1 November 1997, as János Bolyai is perhaps considered to be the most prominent Hungarian scientist. 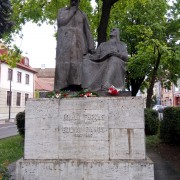 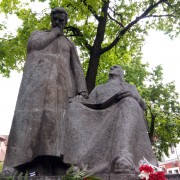