During his reign, considerable economic, artistic and cultural progress was made in Wallachia, and the Brâncovenesc style evolved as an architectural style. Constantin Brâncoveanu ensured internal stability in the country, founded numerous churches and monasteries, laid the foundations of the Princely Academy and supported the printing press. In April 1714, due to intrigues by the country's political opponents and the considerable fortune that Brâncoveanu had managed to gather, he was deposed from his throne by the Ottoman Empire and tortured along with his family, to reveal where he had hidden his fortune. He was executed by decapitation along with his four sons on 15 August 1714, in Istanbul. Prior to the execution, Brâncoveanu refused to renounce his Christian faith and to convert to Islam to be forgiven. In 1992, the Romanian Orthodox Church canonised Brâncoveanu and his sons, who are celebrated each year on August 16 under the name of the Brâncoveni Holy Martyrs.

The statue is located in the yard of New St. George's Church.

The statue is made of bronze and is 3 m high. It shows Constantin Brâncoveanu in an oriental costume according to the style of the era, wearing a cloak decorated with fur over a long tunic, with a plume-decorated fur hat crowning his head. The statue was mounted on top of a 4 m high pedestal.

The idea to have a statue erected to honor the martyrdom of Constantin Brâncoveanu belonged to Iulian Peter, mayor of Bucharest in 1938. The statue was made by sculptor Oscar Han and was unveiled in 1939. It was placed in front of the New St. George's Church, founded by Constantin Brâncoveanu, where, several years after his death, his wife brought and buried his body in secret. The monument was supposed to be unveiled in 1939 in the presence of King Carol II, but the ceremony did not take place. Brâncoveanu's statue did not enjoy a traditional unveiling ceremony, but only an inauguration ceremony at the same time as the inauguration of Ion C. Brătianu Boulevard on 27 November 1943.

The New St. George's Church honors the memory of the Brâncoveni Martyrs every year, on August 16. Located in the courtyard of the church, the statue of Constantin Brâncoveanu is also included in this ceremony. 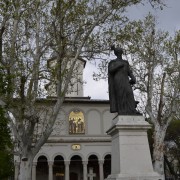 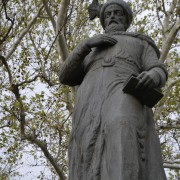 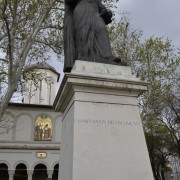