The monument is dedicated to political detainees who worked at the canal linking the Danube to the Black Sea between 1950 and 1953.

Between 1949 and 1953, communist authorities tried to achieve one of the amplest construction projects: The Danube-Black Sea Canal. Tens of thousands of political detainees worked in extremely harsh conditions in the 14 forced labour camps along the 70 kilometres of the Canal. Due to the working and detention conditions, some of the detainees died at the Canal and most of them were buried in unknown locations. The Canal project was closed in 1953 without being finished.

The monument is located outside of the commune of Poarta Albă, where the canal splits between the harbours of Agigea and Midia.

On the commemorative plaque: 'This monument is dedicated to the memory of those exterminated by the Communist regime while working on the Canal between 1950 and 1953, for they loved their people, their faith and country; it was made by the Association of Former Political Detainees - Constanța Branch - and by the County Council of Constanța. Let us remember!'.

The monument has 11 modules, two of which overlap. On each of the overlapping modules there is the name of a forced labour camp along the Canal. The modules are installed on a metallic structure. There is an internal stairway and an electric installation, having another installation on its upper side which illuminates at night. The monument is 24 meters tall. The monument is 24 meters high. Around the monument there is a 400 square meter platform decorated with mosaic, with stairs on two sides.

The idea to build a commemorative monument for detainees from the colonies along the Canal took shape in the early 1990's. Until 1997 there were several projects which were abandoned due to high costs. The monument was created at the initiative of the Association of Former Political Detainees from Romania - Constanţa branch, led by Paul Andreescu, being placed close to the largest forced labour camp along the Canal, Poarta Albă. The Memorial at Poarta Albă was built between 1999 and 2000, by the blueprints of architect Ioan Paschilă. It was unveiled on 28 September 2000, an event attended by a large number of former political detainees.

Every year, on March 9 (during the celebrations for the Former Political Detainees from Romania) or on Ascension Day (also Heroes' Day) and at the end of September, there are memorial services for the detainees held in the colonies along the Danube-Black Sea Canal. Since 2003, travel agencies in the county provide postcards of the monument and fliers detailing its history. 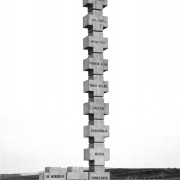