The monument is dedicated to the Union of the Romanian Principalities (Wallachia and Moldavia) and was erected on January 24, 1859 (a historical moment that is also known as the Small Union). It was not by chance that the monument was placed in Focşani, considering that several important institutions of the newly created state were also set up here after the Small Union.

The Union Monument is located in the city centre, on the former Moldavian-Wallachian border in Focşani, near the city hall, the public garden and the Birth of John the Baptist Church.

Union of the Romanian Principalities. 1859

The monument has a 1.4 m high octagonal base made up of three stairs plated with red granite. A 2.24 m high bronze torus is placed on top, with a bas-relief depicting several representative moments of the Union between Wallachia and Moldavia: Alexandru Ioan Cuza, ruler of the Romanian Principalities [Domnitor], surrounded by his main associates, a Wallachian and a Moldavian shaking hands in front of the border stone separating the two principalities, the Unity Dance [Hora Unirii]. A 16 m high obelisk plated with red granite rises above the torus, with a bronze shield placed among oak leaves on the northern side of the monument and bearing the inscription: „Union of the Romanian Principalities. 1859”.

Beginning with the 1960s, Communist authorities in Romania wanted to emphasize their independence from Moscow by creating a sort of National Communism, and one way to do this was to appeal to national history. Thus, starting from this period, Communist authorities gave their consent for setting up monuments dedicated to personalities and events from Romanian history. The Union Moment in Focşani is just one example in this regard. The monument, along with the entire Union Square, was created following a visit to Focşani by the Party and State leadership of Romanian in 1966. The monument was build according to the plans of sculptor Ion Jalea and was unveiled on January 24, 1976.

Every year, on January 24, ceremonies are held at the Union Monument in Focşani in honour of the Union of the Romanian Principalities Act of 1859. It is included on the list of historical monuments in Romania. 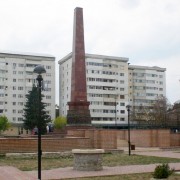 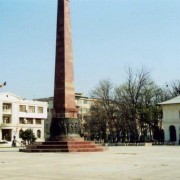