Monument of the Anti-Communist Resistance

The Anti-Communist Resistance Monument is located in the courtyard of the Descent of the Holy Ghost Orthodox Church in Alba Iulia.

We fought the right fight. We guarded the faith

The map is depicted on the front side of the monument, pinpointing the location of the various detention and death camps in Romania. The back side of the monument shows the map of the Alba County and the places where armed fights with the Securitate were carried out by Maj. N. Dabija, Leon Șușman, a lawyer, Capt. Ionescu Diamandi, Ștefan Popa, a student, and the group from Mureș with the motto: „Salus patriae, suprema lex”.

The monument is the work of the architect Iulian Oprișan and was erected on the initiative of the Association of Former Political Detainees in Romania, Alba subsidiary. It was unveiled in the courtyard of the Descent of the Holy Ghost Orthodox Church in Alba Iulia in the presence of numerous former political detainees from the counties of Alba, Hunedoara, Sibiu, Mureș and Arad.

It is a symbol meant to honour former political detainees who were detained or died in prison, labour camps or deportation centres in Romania during the Communist regime. As of 2000, wreaths are placed here yearly in honour of the victims of Communism.

Commemorations are held yearly to honour the victims of Communism. On August 23, 2018, a ceremony was organised at the Monument of the Anti-Communist Resistance in Alba Iulia for the reinterment of ten anti-Communist fighters from Transylvania who lost their lives in 1949, in the armed clashes with Communist authorities that took place in several location in Alba County. 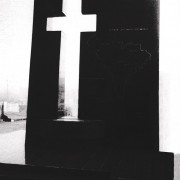 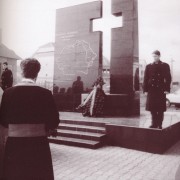