The sculpture is dedicated to the Romanian soldiers fallen during World War I in the fights from 1916 on the banks of the River Jiu.

The Endless Column is 29.35 m tall and is made of cast iron coated in brass. It is composed of 15 overlapping octahedral modules and 2 module halves situated at the lower and inferior extremities. Every module has a height of 180 centimetres. The column has a metallic nucleus made of a square pipe and a 5 meter deep concrete foundation. The Endless Column is a stylized version of funerary poles from southern Romania.

In 1934, the great Romanian sculptor Constantin Brâncuşi was invited by Aretia Tătărescu, the president of the National League of Women from Gorj, to design a monument in memory of Romanian soldiers who had fallen during World War I. At Brâncuşi's request, engineer Ștefan Georgescu-Gorjan dealt with the technical aspects of the monument. The monument was cast in iron at Atelierele Centrale Petroșani (central workshops of Petroșani) in September 1937. The Endless Column was inaugurated on 27 October 1938. This monument is part of the trilogy of the monument ensemble from Târgu Jiu, which was created by the great sculptor Constantin Brâncuşi, along with Poarta Sărutului (The Gate of Kiss) and Masa Tăcerii (The Table of Silence).

In the 1950s, the Endless Column was threatened to be demolished, as communist authorities at the time considered Brâncuşi's monument to be an example of bourgeois sculpture. Between 1998 and 2000, the Endless Column underwent an ample restoration process, by the collaboration of the Romanian Government, the World Monuments Fund and the World Bank.

The Endless Column represents a part of the legacy which Constantin Brancuşi has left to his native country, becoming one of the symbols of Romania's cultural heritage. Along with the Table of Silence and the Gate of Kiss, the Endless Column is one of the most popular and visited touristic sites in the country. 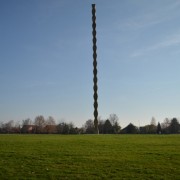