The monument is dedicated to Ecaterina Teodoroiu, a heroine of World War I. She took part in setting the foundation of the first scouts’ organizations in Romania. During World War I, she first worked as medical nurse on the warfront along her native region, then she enrolled in the army. She was promoted to the rank of second lieutenant due to her merits on the warfront. In this role, she led an infantry platoon in the battle of Mărăşeşti (1917), during which she was shot and died at the age of 23.

The monument is located in Piaţa Revoluţiei (formerly known as Piaţa Victoriei), in front of the building of the Gorj Prefect’s Office, close to the Sfinții Voievozi Cathedral.

The monument is made out of Italian travertine stone. It is in the shape of a sarcophagus 2.10 meters tall and with sides of 2.90 and 1.60 meters, being sealed on the top side with a natural stone lid. On the sides of the sarcophagus there are bas-reliefs representing scenes from the life of Ecaterina Teodoroiu: on the southern side there are scenes from her childhood in her native village; on the northern side is the image of Ecaterina Teodoroiu being saluted by scouts; on the western side she is represented setting out for attack, along with other soldiers; and on the eastern side a group of soldiers are depicted carrying her lifeless body. At the 4 corners of the sarcophagus there are 4 life-size women statues, dressed in traditional garments of the historical provinces and holding laurel wreaths in their hands. The monument has a three-step stone pedestal and it is oriented to match the four cardinal points. The Mausoleum is bordered by a bronze cross on the eastern side.

In 1917, the body of Ecaterina Teodoroiu was buried in the area of the warfront where she had fallen. In 1921, her body was transported to her native land, in Târgu Jiu, and laid in a crypt at the centre of the town. In 1935, at the initiative of the National League of Women from Gorj, it was decided to build a monument which would showcase the tomb of Ecaterina Teodoroiu. This was carried out by sculptor Miliţa Păraşcu. The mausoleum was unveiled by King Carol II on 8 September 1935, during an impressive ceremony which the mother of Ecaterina Teodoroiu also attended.

During the Communist period, the bronze cross adjacent to the mausoleum was removed and the monument was abandoned and started to deteriorate. In 2018, at the initiative of local authorities, it was restored and a replica of the bronze cross was placed next to the mausoleum. The monument was re-inaugurated to mark the 100th anniversary of the end of the war and of the Great Unification of Romania.

The mausoleum is included in the historic tour of the town of Târgu-Jiu, along with the Ecaterina Teodoroiu memorial house. 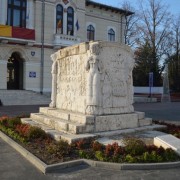