Victims of the Holocaust from Sighetu Marmaţiei and Maramureş.

The monument is located at the intersection of streets Gheorghe Doja and Andrei Mureşan.

In memory of the victims killed at Auschwitz (translation from Yiddish) 1994.

Monument built in memory of the thirteen thousand Jewish people from Sighet and then fourty thousand people from Maramureş deported by Hungarian authorities in May 1994. It is approximately 4 meters high and sits on a black plinth with a white menorah and the inscription 1944, while on the upper side one can read the text inscribed in Yiddish.

The monument was built in 1948, on the former location of a synagogue.

In the 1960's the letters were changed and the monument was completely renovated and celebrated in another ceremony.

A place of annual commemorative events in memory of deportees. 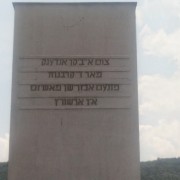 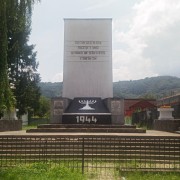 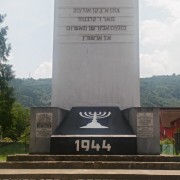