Monument of the Romanian Soldier

It is located within the arboretum, close to the Carei City Museum and the Carei Museum.

The monument is made of white stone. The front opening of the monument is 18 m long, 5 m wide and 13 m high. It consists of five elements of symbolic significance: a peasant’s head, which stands for dignity and firmness (a symbol of peasant rebellions), a gate with carvings similar to those adorning the famous wooden gates of Maramureș (“Gate of Sacrifice”), a woman planting (a symbol of renewal), the face of a soldier which impresses by its massive size and strong features and an obelisk resembling the turrets of churches in Maramureș (the symbol of the eternal flame).

On 25 October 1944, the Romanian Army liberated the last Romanian town under foreign occupation: the city of Carei. The anniversary of the Battle of Carei of October 25th is celebrated annually, ever since 1959, as the Day of the Romanian Army, honouring both those who were or are at its service. The monument was unveiled in 1964, in the city centre, two decades after the fights that took place around Carei during World War II. Leontin Sălăjan, Minister of the Armed Forces at the time, attended the unveiling ceremony. It is an artwork by sculptor Vida Gheza and by architect Anton Dâmboianu.

The Monument of the Romanian Soldier in Carei was included in the patrimony of the County Museum, which falls under the jurisdiction of the Municipality of Carei, at the beginning of September 2013, and rehabilitation works commenced soon after. Different festivities are held annually at the Monument of the Romanian Soldier in honour of the heroes of the Romanian people and the Romanian Army; the wreath laying ceremonies and military parades are usually attended by leading figures. The monument serves as a meeting place for people who share a love for their homeland, as well as a place of remembrance.

It is a commemoration site for the heroes who lost their lives in World War II. Due to its location, it is one of the most frequently visited monuments in the city of Carei. The monument is listed under No 304, code SM-III-m-A-05382, in the List of Historic Monuments, which was revised by Order of the Minister of Culture and Church Affairs No 2314/8 July 2004. 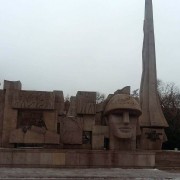 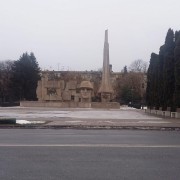