In remembrance of the National Assembly of Blaj in 1848.

The monument lies at the intersection of streets Iuliu Maniu and Câmpia Libertăţii.

"VREM SĂ NE UNIM CU ŢARA!’’ (WE WANT TO UNITE WITH THE COUNTRY!)

The Gloria ensemble, which dominates the Field of Liberty, was unveiled in 1997. The base of the 18-meter high monument is sculpted in stone and it represents a gate to history, bearing the words: "Vrem să ne unim cu țara!’’ (We want to unite with the country). The second element of the ensemble is made of three bronze statues portraying three faces holding laurel wreaths above their heads, symbolizing the three provinces: Wallachia (Ţara Românească), Moldavia and Transylvania. The monument is shaped as a semicircle, having to its left the "Revolution Alley" - a series of 26 bronze busts representing the most prominent Romanian scholars and revolutionaries.

The Field of Liberty in Blaj is not only a field, as the name suggests, covering a surface area of 55 thousand square meters, but it also contains busts of intellectuals; 24 of those statues were unveiled in 1973, on the 125 year anniversary from the 1948 Revolution, whereas the Gloria monument ensemble was raised in 1977, on the centennial of Romania's independence. Other sculptors, such as Ion Vlasiu, Ion Irimescu, Ion Jalea and Marius Butunoiu contributed to the monument, currently classified as a historic monument.

In May 1948 the centenary of the Blaj Assembly was celebrated with great fast, in the presence of Gheorghe Gheorghiu-Dej and Petru Groza. The Plain of Freedom was decorated with portraits of Marx, Engels and Lenin, respectively with panels bearing the inscription "Long live the RPR!".

After the fall of the Communist Regime, the Field of Liberty ensemble radically changed its appearance in 1998, subsequent to restorations, for the visit of president Emil Constantinescu. The Field of Liberty in Blaj hosted over 40,000 Romanians from Transylvania 170 years ago and it was officially re-opened in May, 2018, after an ample process of urban restoration. 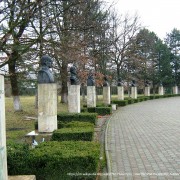 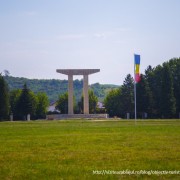 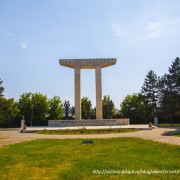