The monument was built as an homage to socialist revolutionary militants.

The monument is located in Carol I Park, on the hill of Filaret, next to the Tomb of the Unknown Soldier, with which it constitutes the Memorial to the Heroes of the People.

During World War II, the present location of the mausoleum was selected for a memorial complex which would include, among others, the Tomb of the Unknown Soldier and a Monument for the Heroes of the People, which was carried out by Alexandru Tzigara-Samurcaș. Due to the war, the project was abandoned. In 1958, Communist authorities decided to build on this spot the monument of the heroes in the fight for the freedom of the people and the nation, for socialism. This was carried out between 1959 and 1963, based on the blueprints of architects Horia Maicu and Nicolae Cucu, yet also including the blueprints of the Memorial designed during World War II. The monument was inaugurated on 30 December 1963. To build the mausoleum, the Tomb of the Unknown Soldier was moved, only to return to its initial spot in 2006.

Designed as a necropolis, the mausoleum and the hemicycles around it were used to bury eminent Communist leaders and members of the Romanian Communist Party from its inauguration until 1989. In 1991, after the fall of Communism, the earthly remains of those buried here were taken to other places by their families. In the early 2000's, there were debates about demolishing the mausoleum to build the People's Salvation Cathedral (Catedrala Mântuirii Neamului), an idea which was dropped after another location was found for the cathedral. In 2006, the Romanian Government decided to have the Memorial of the People's Heroes built so as to include the former mausoleum and the Tomb of the Unknown Soldier. The circular chamber was renovated, now having various historic episodes depicted on the 14 niches, such as the War for Independence, World War I and World War II. The centre of the chamber, which used to hold the coffin of Communist leader Gheorghe Gheorghiu-Dej, now holds the statue group "Pe aici nu se trece" (Thou shall not pass), made in 1924 by sculptor Ioan Iordănescu, portraying King Ferdinand and goddess Nike.

Nowadays, the monument is under the administration of the National Office for the Cult of Heroes. The interior of the former mausoleum can only be visited on certain days: Open Doors Day (annually) or when remains of Romanian soldiers are brought from the battle fields where they died. As a part of the Memorial to the People's Heroes, there are annual commemoration ceremonies on Heroes' Day (celebrated on Ascension Day) and on the National Day of Romania (December 1). 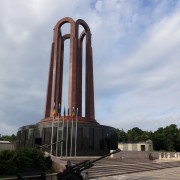 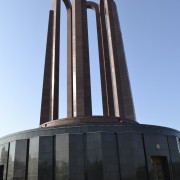 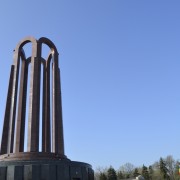