The monument is dedicated to the Unification of the Romanian Principalities (Wallachia and Moldavia), and was erected on 24 January 1859, a historical moment that is also known as the Small Union. It was not by chance that the monument was placed in Focşani, considering that several important institutions of the newly created state were also set up here after the Small Union.

The monument is located in Union Square (Piața Unirii), near the Focşani City Hall and the Birth of John the Baptist Church (Biserica 'Naşterea Sf. Ioan Botezătorul').

Romanians, as many as they are in Wallachia, Transylvania, Maramureș, together with Moldovans are one, and all originate from Rome. (Grigore Ureche)

Let's join hands / Those with Romanian hearts / To go round the dance of brotherhood / On Romania's land. (Vasile Alecsandri)

The Union of Romanians, I do not acknowledge anyone's right to claim it was [made possible] by his own individual act, his exclusive property: the Union is the energetic act of the whole Romanian people. (Mihail Kogălniceanu)

Citizens of the City of the Union of the Principalities built this as a sign of remembrance of a past of victorious faith, in the fortieth year of the Cultural League that held its congress here. This was once Border Outpost No. 47 at the border of Milcov, separating the two sister countries, Moldavia and Wallachia.

At the base of the monument: Moldavia; Wallachia; Focșani; Romania

The monument is made of stone, in the shape of a pyramid trunk. The four sides are covered in bronze bas-reliefs with the coats of arms of the two principalities. On each side, there are also metal plaques inscribed with quotes by Romanian scholars with regard to the Union of the Principalities and information about the monument. The names of the two Principalities, the city and the county are carved in stone at the base of each side.

On the occasion of the 40th anniversary of the Cultural League, the Cultural League of Romanians, the Putna Students' Association and the local office of the Cultural League in Focşani decided to have a monument built that would remind of the Small Union of 1859. A decision was made to place the new monument on the site of former Border Outpost No. 47, one of the border crossings between the two Romanian Principalities, Moldavia and Wallachia. The monument was made by sculptor Ion Jalea and was unveiled on 13 September 1931.

After the unveiling, it was one of the main sites in the country where celebrations were held to mark the anniversary of the Union of 1859. Following the modernisation of the city centre of Focşani and the erection of the Union Monument in the 1970’s, the Border Landmark lost its significance and was moved to different sites in the city (in front of the building of the former Cimbru Hotel, which nowadays houses the Union Museum; behind the Balada cinema). On 26 September 2011, the Border Landmark was returned to its initial location in Union Square.

The monument stands as a symbol of Romanian unity and solidarity. This is one of the main tourist attractions in the city. Given its central location, in Union Square, ceremonies are held here annually, on January 24th, to celebrate the Union of the Romanian Principalities of 1859. 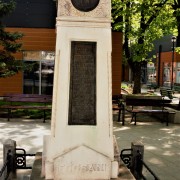 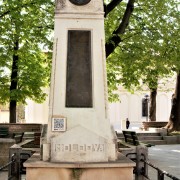 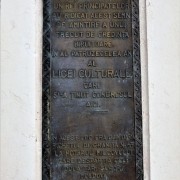 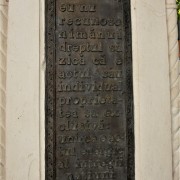 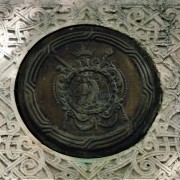 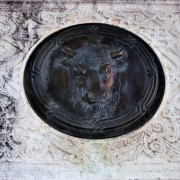 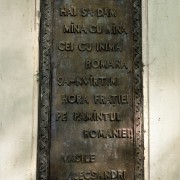 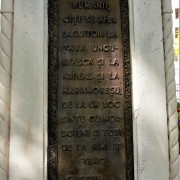