The wayside cross was placed at the edge of Strâmbu-Băiuț, 6 km away from Lăpușul Românesc.

It is a wooden wayside cross, characteristic of the area of Maramureș, approximately 2.5 meters tall.

The wayside cross was unveiled on 18 May 2007 by The Civic Academy Foundation, on the outskirts of the village Strâmbu-Baiut, along the road to Cavnic, in memory of the fighters of the Țibleș Mountains on the spot where Nicolae Pop, leader of the Țibleș group, had died. The event was attended by surviving members of this group of resistance, but also by former political detainees from Timişoara, Cluj, Bucharest, Sighet, Târgu Mureş, Paşcani, Râmnicu Sărat, as well as students participating in the 10th edition of the Sighet Summer School. After the blessing of the wayside cross, the priest from Lăpuş held a religious ceremony along with the priest from Dragomireşti, the son of a partisan priest.

The wayside cross is a place of commemoration and homage to those who fought in the mountains during the Anticommunist Resistance, falling victim to the Communist regime. The Pop-Oniga resistance was the most numerous armed resistance group active since 1949 in the region Țara Lăpușului under the lead of forest ranger Nicolae Pop. The group was annihilated in March 1953. Its leaders were shot and a large number of members were convicted in political trials to long years in prison.

Descendants of mountain fighters meet yearly to bring homage to the memory of those who had the courage to oppose the institutionalization of Communism in Romania. Also, being on a touristic route, it is visited by hundreds of tourists passing through Maramureș. 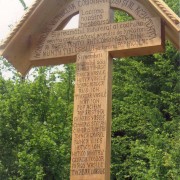 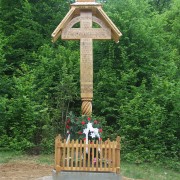