The monument is dedicated to Ion C. Brătianu (1821-1891), politician, leader and first president of the National Liberal Party in the second half of the 19th century. He played an important role in the Revolution of 1848 in the Romanian provinces, serving in several key positions as Minister of National Defence, Foreign Minister, Minister of Finance and Prime Minister. During his time as head of government, Romania gained its independence, the Kingdom of Romania was established, and numerous reforms were made for the modernisation and consolidation of the Romanian state. He was the father of another great politician, Ion I.C. (Ionel) Brătianu.

The monument is located on the esplanade along the Danube, at the intersection of Traian Street, Portului Street and Marea Unire Boulevard.

- on the front: To Ion C. Brătianu, a great Romanian;

- on the left side: Freedom along the Danube is a prerequisite for the country's economic prosperity - 16 November 1882;

- on the right side: A regime shall be set up to guarantee freedom along the Danube from where ships can sail the river and up to the sea - 28 May 1882.

The statue portrays Ion C. Bratianu with his back turned to the city, in a respectable outfit, his left hand reaching into the pocket of his coat, glazing into the distance, his right hand pointing to an undefined spot in the vast plains of Dobroja. The statue is made of bronze, stands 3.5 m high and was mounted on a stone pedestal.

The idea for having a monument erected in honour of the memory of Ion C. Brătianu belonged to an initiative committee headed by the Liberal Mihail G. Orleanu (lawyer and former Minister of Industries). The work was commissioned at the end of 1924 to sculptor Oscar Späthe and was completed in 1926, when it was unveiled. It was placed in Piaţa Sfinții Apostoli (Holy Apostles Square), next to the building which presently houses the Marine High School, and was unveiled in a ceremony attended by representatives of the National Liberal Party and descendants of Ion C. Brătianu.

In 1947, Communist authorities decided to have the statue removed. It seems that the order was issued by top Communist leader Gheorghe Gheorghiu-Dej himself, who had lived for a while in Galaţi and who had apparently attended the unveiling ceremony of the statue. After being taken down, the statue was stored for two decades in a stable owned by the Municipality of Galaţi, where it was used as a support for harnesses, forks and shovels.

In 1968, the statue was moved to the courtyard of the Art Museum in Galaţi, where it continued to deteriorate.

In 1992, local authorities decided to put the statue again on display in a public space. The statue was restored from the damage caused by the bullets shot in the 1940’s but also by the passage of time. It was placed in a square on the Danube waterfront, mounted on a pedestal similar to its original one. A ceremony for the blessing of the monument was held on 5 November 1992.

The statue is located near the main esplanade of Galaţi, admired by thousands of citizens of Galați and visitors alike. 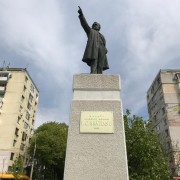 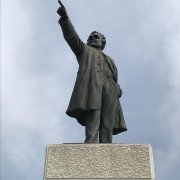