The monument is dedicated to Alexandru Ioan Cuza (1820-1873), the first Prince of the United Principalities (1859-1866). The Union of the two Romanian principalities was accomplished by his election as Prince of Moldavia and Wallachia in January 1859. Several reforms were carried out under his reign, which laid the foundations for a modern framework for the development of the new state. The monument is also dedicated to the Unification of the Romanian Principalities of 24 January 1859.

The monument is located in the rotunda of the Public Garden in Galați, near the Episcopal Palace, which houses the Museum of History, Culture and Christian Spirituality of the Lower Danube.

The monument consists of a stone pedestal with allegorical scenes done in high relief on three sides of the pedestal and cast in bronze. The scenes evoke the Unification of the two Principalities, but also the consequences of the agrarian reform of 1864. The second part of the monument is the statue of Prince Alexandru Ioan Cuza, which is made of bronze. The prince is depicted wearing a military uniform with a cape on top, his left hand resting on the sword and holding a scroll in his right hand, supported by his left hand.

The idea of erecting a monument to honour Alexandru Ioan Cuza in Galaţi dates back to the end of the 19th century, since Cuza was one of the most distinguished personalities of the city, representing Galaţi in the Ad-hoc Assemblies in Iaşi. These consultative meetings were convened in 1857 in Moldavia and Wallachia, to express the will of the people regarding the definitive organisation of the two Romanian Principalities. In 1926, the Municipality of Galaţi bought a reverential monument to the 1859 Union from sculptor Raffaelo Romanelli, consisting of the present pedestal of Cuza’s statue and the bust of Lascăr Catargiu, another Romanian politician who played an important role in the Union of 1859. The monument was unveiled on 14 July 1928, on Domneasca Street, in front of the Public Garden. In 1948, Lascăr Catargiu’s bust was removed by the Communists, leaving only the pedestal behind, which was named the Agricultural Work Monument. 100 years after the Small Union of 1859, Alexandru Ioan Cuza’s bust was placed on top. However, given the discrepancy in size of the two parts of the monument, on 9 May 1972, the statue of Alexandru Ioan Cuza was replaced with that by sculptor Ion Jalea.

Ceremonies are held annually, on January 24, at the Monument of Alexandru Ioan Cuza to celebrate the Small Union of the Romanian Principalities of 1859. 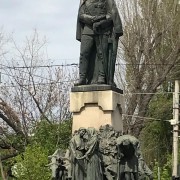 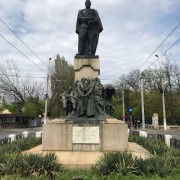 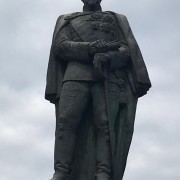