Monument of King Michael I of Romania

The monument is dedicated to Michael I (1921-2017), the last king of Romania, forced to abdicate in December 1947, after the Communists gained control of Romania. Exiled to the West, he was allowed to return to Romania only in 1992, and he received his Romanian citizenship back in 1997.

The monument is located in the King Michael I Square, at the intersection of Kiseleff Boulevard and Arh. Mincu Street, near Kiseleff Park; near the Monument to the Heroes of the Air.

On the plinth: Michael I King of Romania

On the left plaque: The royal crown is not a symbol of the past, but a unique representation of our independence, sovereignty and unity. The crown is a reflection of the state and the nation. The Crown strengthened Romania through loyalty, courage, respect, seriousness and modesty. I do not see nowadays Romania as a heritage from our parents, but as a country that we borrowed from our children. May God help us all! Mihai R

On the right plaque:

Founding of the Royal Family of Romania

1922 The Coronation in Alba Iulia

1997 King's Michael and the Royal Family's return to the country

The monument consists of a bust of King Michael I, portraying him as a sovereign in military uniform, in the centre, as well as two plaques on both sides of the bust, bearing a fragment from King Michael's speech in the Parliament of Romania on the occasion of his 90th birthday and a short timeline of remarkable moments in the history of the Royal Family. The bust of King Michael was made of bronze, stands 135 cm high and was mounted on a 180 cm high pedestal.

The monument of King Michael was unveiled at the same time as the little square bearing the name of the Romanian sovereign, on 25 October 2012, when he turned 91 years old. The ceremony was attended by King Michael I, members of the Royal Family of Romania and national and local officials. The erection of the little square and the monument is an act of recognition of Michael I as a leading figure. The bronze bust was made by sculptor Valentin Tanase and was unveiled by King Michael I himself.

Occasionally, ceremonies are organised for the celebration of Royalty in Romania or to honour King Michael I. 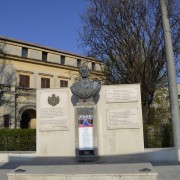 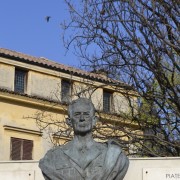 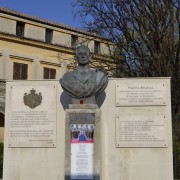