The monument is dedicated to Spiru Haret (1851-1912), scientist and mathematician, who held several mandates as Minister of Public Instruction and was a member of the Romanian Academy. As a minister, he laid the foundations for modern Romanian education by introducing a series of measures, including: setting up kindergardens and schools for children, but also for adults, editing school books or setting up funds for children from poor backgrounds.

The statue is located in the centre of Romania's capital city, in front of the University of Bucharest, near the statues of Mihai Viteazu, Gheorghe Lazar and Ion Heliade-Rădulescu.

The statue is made of Carrara marble, is 2.5 m high and was mounted on a 4.5 m high pedestal made of stone from the quarry of Albești (Muscel). Spiru Haret is portrayed standing, wearing a redingote and holding a scroll in his left hand. On the sides of the pedestal there are two bas-reliefs carved in stone. One depicts Spiru Haret in front of a school, surrounded by children and peasants, while the other shows him in a group of peasants in front of the People's Bank.

In the 1860’s, authorities in Bucharest considered the urban transformation of the capital’s centre. One way to achieve this was to place statues along the main drive routes and in the squares of the city, which would bring beauty in everyday life as well as educate, according to the Western model. The statue of Spiru Haret is the fourth monument located in front of the university, along with the statues of Michael the Brave, Gheorghe Laz and Ion Heliade-Rădulescu. The statue was made by sculptor Ion Jalea and was unveiled in 1935.

Given its advanced stage of decay, the statue underwent extensive renovations in 2006. In 2010, the statue of Spiru Haret was moved from its original location in front of the university building to the Izvor Park, to allow for the construction of an underground car park. The statue was returned to its original site in 2012.

The statue of Spiru Haret is one of the four statues in front of the University of Bucharest, known by the citizens of Bucharest as 'the statues at the University'. Located right in the heart of Romania's capital city, the statue enjoys great visibility among tourists. 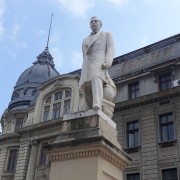 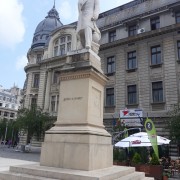 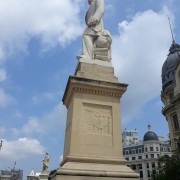 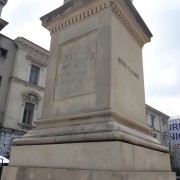