The monument is dedicated to Romania's national poet, Mihai Eminescu (1850-1889).

The statue stands in the garden in front of the Romanian Athenaeum, near the Romanian Art Museum (formerly the Royal Palace) and near Revolution Square.

The statue portrays young Mihai Eminescu standing with a cloak over his shoulders and a scarf around the waist. It is 3 m high and is cast in bronze.

Having been genuinely fascinated with Mihai Eminescu, sculptor Gheorghe D. Anghel produced several statues of the national poet, which are located in several cities in Romania. The statue in front of the Romanian Athenaeum is the last work of art by the sculptor, who finished it in 1965, shortly before his death. In 1966, Eminescu's statue was first exhibited at the Dalles Hall, and was then mounted at its present site.

Every year, on January 15, ceremonies are held here in honour of the poet, but also for the celebration of the Romanian National Culture Day. Given its location, in front of the Romanian Athenaeum, the statue enjoys great visibility, both from tourists visiting the capital of Romania, as well as from participants in the cultural events organized at the Athenaeum. 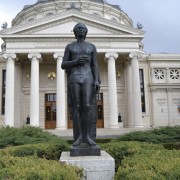 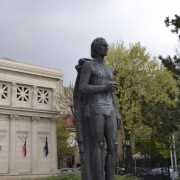 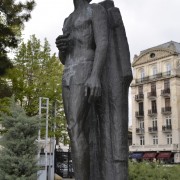