It is dedicated to soldiers of the engineer arm who died in World War I.

It is located at the intersection of boulevards Iuliu Maniu and Geniului, close to the Cotroceni Palace.

Tell succeeding generations that we made the supreme sacrifice on the fields of battle for the union of the people.

The most prevalent element of the monument is represented by a bronze lion, a symbol of force, with a length of 5.40 m and a height of 4.4 m. The lion is shown standing on a cannon barrel and on a helmet, over which unwinds a battle flag belonging to enemy troops.  The lion is placed on a monumental pedestal and it is made of artificial rock; it has four life-size soldiers at the four corners, representing the units of engineer arms: pioneer, railways, bridge unit and the combat signaller unit. Also on the pedestal, on each side, there are bas-reliefs representing moments from the battle of those soldiers. At the bottom of the inscription there is a bronze medallion stating to whom the monument is dedicated.

The initiative to build such a monument was taken by Gen. Constantin-Ştefănescu-Amza, the commander of the engineering training centre and schools. The funds to carry out the project were raised from voluntary contributions of all engineer officers from the Romanian army. The monument was built by sculptor Spiridon Georgescu, following a project contest organized in 1925. The monument was sculpted in 1926 and its unveiling took place on 29 June 1929, in front of representatives of the Royal House, the government and the army.

In the Communist period, the inscription of the monument was fragmented and the words 'for the union of the people' were taken out. The inscription was re-done after 1990.

The monument has also given its name to the nearby square, Piaţa Leu, and to the nearby student campus, Campusul Studențesc Leu. Short wreath ceremonies are organized here on the days when Romanian soldiers fallen in World War I are commemorated, as well as on the Romanian National Day. 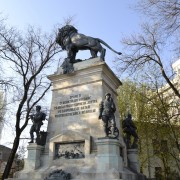 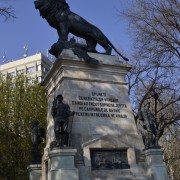