Obelisk of Horea, Cloșca and Crișan in Alba Iulia

The monument was built in honour of the leaders of the revolt of 1784-1785, Horea, Cloșca and Crișan, who are considered to be martyr heroes of the revolt of 1784 in Țara Moților (whose inhabitants are known as moți) against the great landowners in the Apuseni Mountains. After the crackdown of the revolt, the three were arrested, Horea and Cloșca were publicly executed on the breaking wheel on 28 February 1785, while Crișan took his own life in prison a few days earlier.

It is located inside the Alba Carolina Citadel, a huge star-shaped fortress housing museums, churches, cafés, bars and a medieval themed hotel in front of the citadel’s third gate.

The 22.5 metre high monument is made of Banpotoc limestone, while the pedestal was built out of trachyte, a harder rock, and was placed on a terrace which is visible from tens of kilometres away. The three vertical strips on the Western facade make the monument seem taller. The haut-relief depicting the three leaders in front of peasants on the same facade is positioned on a frame which is bordered by floral elements that draw up the map of Romania. The monument houses a symbolic cell with the inscription: 'Smerită închinare lui Horea, Cloșca și Crișan' (A humble praise to Horea, Cloșca și Crișan). A Winged Victory holding a laurel wreath in one hand is depicted on the eastern side of the monument, while a bas-relief of the three leaders of the revolt is positioned on the western side.

The obelisk is the work of sculptor Iosif Fekete (Negrulea) and architect Octavian Mihălțan. The money needed for building the monument came from an initial public fundraising campaign organised by the ASTRA Cultural Society and from the Romanian Government. The monument was unveiled on 14 October 1937, in a national celebration attended by King Carol II of Romania and by Prince Michael, voivode of Alba Iulia, future king of Romania (1940-1947).

A commemoration ceremony in honour of the martyrdom of the revolt’s three leading figures is organised yearly.

On 1 November 1984, the Romanian postal services put into circulation a postal stamp issue entitled “200 years since the people’s revolt led by Horea, Cloșca and Crișan”, issuing stamps depicting the obelisk, with a face value of 2 lei. The obelisk is an important tourist attraction in the citadel and in the city, and is included on the List of Historical Monuments in Alba County. It is included in most tourist guides. 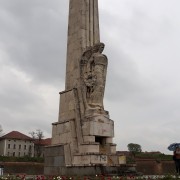 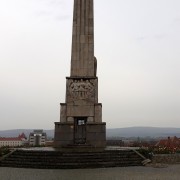 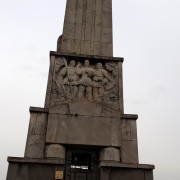