Ion I.C. (Ionel) Brătianu (1864-1927) was the president of the National Liberal Party, one of the main artisans of the Great Union of 1918. As one of the leading political figures in the first interwar decade, he served for several times as President of the Council of Ministers, Minister of Internal Affairs and Minister of Foreign Affairs.

The monument is located in Ion I.C. Brătianu Park, close to Piaţa Romană and Calea Victoriei.

The statue of Ionel Brătianu was made of granite monolith from Jablanica, and was placed on a socle of reinforced concrete, coated in black marble. Brătianu is depicted in a contemplative pose, sitting in an armchair and holding a book in his right hand.

The initiative for building such a monument belonged to Ionel Brătianu’s wife, Eliza, and a committee formed by his main associates. The statue was made by sculptor Ivan Meštrović in 1937, and was placed on a bespoke site, close to Ionel Brătianu’s house in Bucharest, in the same year. It was unveiled on 29 November 1938, in the presence of Eliza Brătianu and several senior figures of the time.

In 1944, Russian soldiers entering Bucharest tried to destroy the statue by shooting their revolvers at it. The traces of bullets can still be seen today on Brătianu’s coat. After the Communists seized power in Romania, many statues depicting prominent figures of interwar Romania were pulled apart, while bronze statues were melted. The statue of Ionel Brătianu was also taken down, but could not be destroyed since it was made out of granite, and was kept hidden until the beginning of the 1990s, when it was restored to its original location thanks to efforts made by the family of the great statesman. 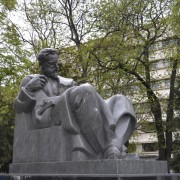 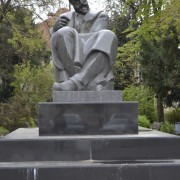 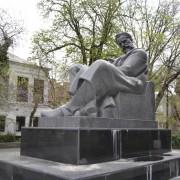