Equestrian statue of Carol I

The statue represents King Carol I (1839-1914), the first king of the Romanian people, who ruled the nation for 48 years. The first Romanian Constitution was adopted under his rule, and it was also under his rule that the country obtained its independence and that several modern Romanian institutions were born.

The statue is located near the Royal Palace (presently the Romanian National Museum of Art), the Romanian Athenaeum and the Palace of the Carol I University Foundation (housed in the Central University Library).

The statue depicts King Carol I in an equestrian position. It was made from bronze, it has a weight of 13 tonnes and a height of 13 meters – the statue has 7 meters in height and the pedestal on which it lies is 6 meters tall.

The statue is placed on the location of an older statue of King Carol I. The old statue was made by sculptor Ivan Meštrović at the end of the 1930s and it was unveiled in 1939. After the Communist regime took hold in 1948, the bronze statue of King Carol I was taken down with the help of tanks and the bronze it contained was used to build Lenin's statue in Bucharest, which was placed in front of Casa Scânteii between 1960 and 1990. The project to build the statue started in 2007, at the initiative of local authorities in Bucharest. It was also taken into consideration to redo the old statue of King Carol I following the original plans of sculptor Ivan Meštrović, but eventually the project was assigned to sculptor Florin Codre, who created a statue similar to the old one, without rendering an exact copy of it. The statue was unveiled on 6 December 2010, in the presence of Romanian authorities and of members of the royal family of Romania.

Ceremonies for celebrating the Romanian monarchy are occasionally organized at the statue of King Carol I. 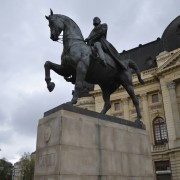 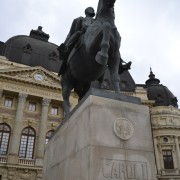