The Monument of the Heroes of the Air (The Aviators’ Monument)

The monument is dedicated to the Romanian aviators, military and civil alike, who contributed to the development of aviation.

Located on Bulevardul Aviatorilor, in a square baring the same name, the monument is close to the Kiseleff Park, to the Romanian Government, the Romanian Peasant Museum and the National Geology Museum.

To the Heroes of the Air.

The monument is 20 m tall, composed of an obelisk-shaped stone pedestal erected on a base made of 4 trapezoidal prisms connected by stone arches at the corners. The base is set on a circular pedestal. Around the obelisk there are four bronze figures which are climbing progressively in a spiral formation, which symbolizes the Sacrifice of the Heroes of the Air. The pedestal also contains the badges, helms and equipment of the aviators, as well as 12 large bronze plaques containing the names of 179 aviators who died between 1912 and 1934. Atop the obelisk lies Icarus, also made of bronze, who symbolizes the Victory of Aviation and has a height of 5 meters.

The idea to build a commemorative monument to immortalize the memory of aviators who sacrificed themselves for the progress of aviation was born after World War I. In 1923, a committee was formed to ensure this. A project contest was launched a few years later and sculptor Lydia Kotzebue was selected to carry out the work in collaboration with sculptor Iosif Fekete. The monument was built between 1930 and 1935. The inauguration took place on 20 July 1935, being attended by King Carol II, by members of the government and representatives of the air force.

The Monument of the Heroes of the Air is the traditional celebration place of the Romanian Aviation and Air Force Day, celebrated yearly on July 20. On that day there are religious and military ceremonies, as Romanian Air Force aircraft fly over the events. 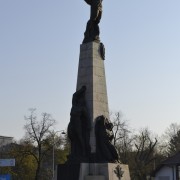 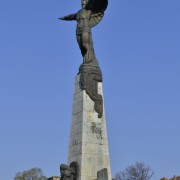 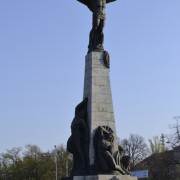