The monument is dedicated to Corneliu Coposu (1914-1995), who spent 17 years in prison as a political detainee during Communism and who was president of the National Christian Democratic Peasants' Party and leader of the Romanian opposition after 1989.

The monument of Corneliu Coposu is located in the centre of Bucharest, in Piaţa Revoluţiei, on one of the main arterial roads of the Romanian capital city. It is close to the Kretzulescu Church, to the Romanian National Art Museum (formerly known as Palatul Regal – the royal palace), to the Romanian Athenaeum and to the statue of King Carol I.

The monument is represented by the bust of Corneliu Coposu in bronze, whose face has a spiritualized allure marked by the years spent in Communist prisons, his eyes looking at passers-by, with broad shoulders and a thin neck. The bust is placed on an unusual-size, narrow socle, also made of bronze. The two elements, the bust and the socle, form a common shape which symbolizes a cross.

The sculpture was done by sculptor Mihai Buculei and it was placed in its current location and unveiled in 1996, approximately a year after the death of the great politician. The sculptor had initially created a plaster model to display in an art gallery, but at the request of Corneliu Coposu's sisters it was then cast in bronze to be publicly exhibited.

At the monument of Corneliu Coposu there are occasional homage ceremonies in his honour. Representing Corneliu Coposu, the monument symbolizes the fight against Communism, surviving the Communist repression and the return to democratic values. By its location, the monument is one of the important touristic sites in Bucharest. 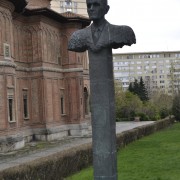 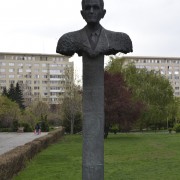 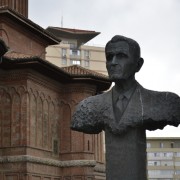