The Calvarul Aiudului Monument is located in "Râpa robilor" (the ravine of slaves) or "Dealul robilor" (the hill of the slaves), as is known the place in which the detainees who died in the Aiud prison were buried.

Happy are those oppressed for justice

Located in the south-western area of the town of Aiud, the monument is 18 meters high, 6 meters wide and 27 meters long. It has 14 6-meter crosses placed above it, on two combining rows, over which there is a large, slightly tilted cross. It symbolizes the suffering endured by those imprisoned by communists in the Aiud penitentiary, whereas the 14 crosses represent the martyrs who carry on their shoulders the large cross – the suffering of the Romanian people. On the arms of the cross there are two holes, a symbol of the crying eyes looking to God, the only hope of prisoners.

In 1992, the Association of Former Political Detainees from Romania, through its Alba and Sibiu branches, made the decision to build a monument and a monastic settlement in Râpa robilor. The design of the monument is by architect Anghel Marcu in collaboration with architects Nicolae Goga and Liliana Chiaburu. The monument was completed in 1999. Inside the monument, on the walls of the chapel, along the stairs leading to the altar, there are marble plaques containing inscriptions of the names of detainees from communist prisons in Romania. An 'e' was marked in front of the names of those executed in prisons.

Ever since the inauguration, there are annual meetings between (fewer and fewer) former political detainees on Cross Day (September 14), who were imprisoned in the Aiud prison.

In 1997, the monument and its author were awarded the special prize within the Arhitext Design awards. The monument is mentioned in most tourist guides and it is visited by those passing through the town of Aiud, to bring homage to those who suffered in the prisons of communist Romania. 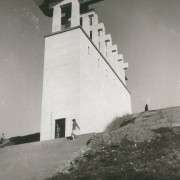