The monument is dedicated to Romania’s participation in World War I (1916-1918) and to the Unification of all Romanians from 1918.

It is located at the centre of a square which bears its name and lies at the intersection of boulevards Kiseleff, Aviatorilor, Alexandru Constantinescu and Mareşal Alexandru Averescu, close to the Herestrău Park and to the Caşin Church.

The central inscription on the northern facade gable, dedicated to the crowning of King Ferdinand I and Queen Marie at Alba Iulia: „Liberator de neam și întregitor de hotare prin virtutea ostașilor săi vrednici urmași ai eroilor creștinătății Ferdinand I Domn și Rege al românilorși-a făcut intrarea la 16 octombrie 1922în cetatea sa de scaun a Bucureștilor după încoronarea la Alba-Iulia” (Liberator of the people and shaper of borders by virtue of his worthy soldiers, descendants of the heroes of Christianity, Ferdinand I Lord and King of Romanians has entered Bucharest, the citadel of his throne, on 16 October 1922, after his crowning at Alba Iulia)

On the eastern facade gable, the central inscription is dedicated to the political and cultural figures who made possible the unification: „Glorie celor ce prin lumina mintei și puterea sufletului au pregătit unitatea națională” (Glory to those who, by an enlightened mind and by the power of their soul, have prepared the national unity)

The central inscription on the western facade gable, dedicated to the heroes who fought in the war, for the Union: „Glorie celor ce prin vitejia și prin jertfa lor de sânge au înfăptuit unitatea națională” (Glory to those who obtained national unity through their courage and sacrifice of blood)

The message of King Ferdinand I from 27 August 1916, as Romania was entering the war

The proclamation of King Ferdinand I to the people, stated at Alba Iulia on 15 October 1922, on the occasion of his crowning as King of Great Romania

Built in neo-Romanian style, from pink Ruşchiţa marble and various rock types brought from several important quarries around the country, it has a height of 27 m and a base of 25 m by 11.5 m. Aside from the inscription above, the Arch of Triumph also contains: two effigies depicting the faces of King Ferdinand I and Queen Marie; the old version of the Royal Romanian coat of arms from before 1922; the royal cypher of Carol II; the 'Manhood' (Bărbăția) medallion by sculptor Ion Jalea; the 'Faith' medallion by sculptor Constantin Baraschi; a few dates of confrontations from World War I on the Romanian front. The two pillars sustaining the arch have interior stairs which lead to the terrace of the monument and inside there is a small museum.

In 1922, in the context of the crowning of King Ferdinand I and Queen Marie as sovereigns of Romania, the event organization committee made the call to build an arch of triumph. As the term was too short, it was carried out by the project of architect Petre Antonescu, resulting in a reinforced concrete construction, with decorative elements made of plaster and clay, which degraded by the beginning of the 1930s. In 1935, they started the work to finalize the monument, under the lead of the same architect, Petre Antonescu. It was inaugurated on 1 December 1936, 18 years after the union between Transylvania and Romania.

In the communist period, the symbols which hinted to the monarchy (the texts of the proclamation of King Ferdinand I, the portraits of King Ferdinand I and Queen Marie) were removed. After 1989, important restoration works were carried out and original decorative elements which had been removed after 1945 were put back in place. In 1990, when 1 December became the National Day of Romania, the Romanian army paraded under the Arch of Triumph, as it became a symbol of the national day of Romania.

Starting 1990, the Arch of Triumph has become one of the most important places in the country for celebrating the National Day of Romania.  Every year, on 1 December, the National Day is marked by a military parade and a wreath ceremony. It is one of the important points of the Bucharest City Tour touristic line. 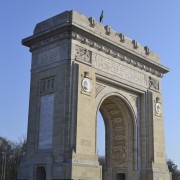 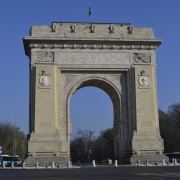 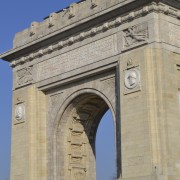