The statue depicts the legendary founders of Rome, the two brothers Romulus and Remus, being breastfed by a she-wolf. According to the legend, the two brothers were the sons of Mars and Rhea Silvia, but were not bestowed with good fortune. Their uncle Amulius feared that the brothers would grow up to overthrow him, and ordered for them to be killed. The servant ordered to carry out the sentence took pity on the two children and left them on the banks of the River Tiber hoping that someone would find them. The twins were found by a she-wolf who cared for them as if the they were her own. As young adults, they decided to built a city of their own, but since they could not decide who was going to rule it, Romulus killed Remus in a conflict.

The statue is located in Vasile Lucaciu square, facing the Monument of the Romanian Soldier, close to the Satu Mare County Museum.

The statue is a copy of the famous Lupa Capitolina (Wolf Statue) from Italy’s capital, depicting the legend of the founding of Rome, according to which the two brothers who founded the city had been cared for by a she-wolf. The supporting rod bears an inscription and three effigies with the faces of Roman Emperor Trajan (98-117 AD), King Decebalus (king of Dacia between 87 and 106 AD) and King Ferdinand I (king of Romania between 1914 and 1927).

The statue was created in 1992 and cast by sculptor Radu Ciobanu in his own workshop, based on the model of the Capitoline Wolf Statue in Turda. L. Sabău (architect, design), I. T. Rafan (engineer, coordination) and the carver’s shop in Viștea, Cluj (execution) also contributed to the making of the statue. Between 1906-1926, Romania received from the Italian state four copies of the statue The Capitoline Wolf. The first one was placed in Bucharest in 1906, in order to mark 25 years of reign of King Carol I and 1800 years since the conquest of Dacia by the Romans. In 1921, two statues The Capitoline Wolf were placed in Cluj and Chişinău, and in 1926 one statue was placed in Timişoara. Other replicas of the statue were made in Romania and placed in Alba Iulia, Blaj, Brad, Brașov, Constanța, Cristeștii Ciceului, Dej, Galați, Iernut, Leșu, Luduș, Maieru, Năsăud, Săcele, Satu Mare, Sighișoara, Târgu Mureș, Târnăveni, Toplița, Turda, Zalău. The first statue made of bronze was unveiled in Satu Mare in 1936, across the street from the Prefect’s Palace, facing the city centre. After 1940, the statue vanished without a trace.

Nowadays, the Capitoline Wolf Statue stands out as one of the most representative monuments is Satu Mare, bringing an homage to the Latin origin of the Romanian people. It is a popular tourist attraction for people visiting the city. 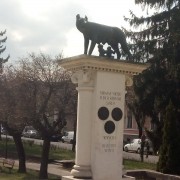 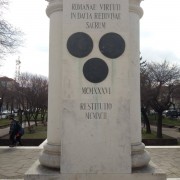 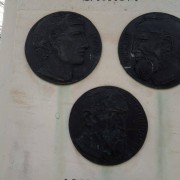