The statue is dedicated to Mihail Kogălniceanu (1817-1891), a liberal politician, attorney, Romanian historian and publicist, with an extremely important role in the Revolution of 1848 and in achieving the union of Romanian principalities of 1859. He had the roles of Prime Minister, Minister of Foreign Affairs and Minister of Internal Affairs. He was one of the creators of modern Romania.

The statue is located at the intersection of boulevards Regina Elisabeta, Mihail Kogălniceanu and Calea Plevnei, close to the Cişmigiu park.

The statue of Mihail Kogălniceanu is made of bronze and it is 3 meters tall. He is represented standing, as an orator. The statue is placed on a triangular pedestal shaped as a 3-layer truncated pyramid, 6 meters tall.

Starting 1898, Romanian liberals requested the capital's Mayor’s Office to install several statues dedicated to personalities from the National Liberal Party, on the East-West axis of the capital city, surrounded by squares. The statue of Mihail Kogălniceanu is the last one from this project which took place between 1903 and 1937. The statue was designed by sculptor Oscar Han in 1936 and placed in its actual location in 1937.

The statue is listed among the historical monuments of Romania. 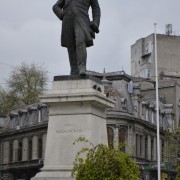 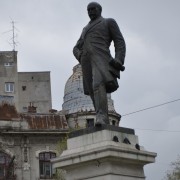