The statue is dedicated to Mons. Vladimir Ghika (1873-1954), Roman Catholic priest, writer and diplomat. He was arrested by the Communist authorities in 1952. After one year of investigation, he was sentenced to 3 years in prison for complicity in high treason. He died on 17 May 1954 in the Jilava Penitentiary because of the tortures he endured during the investigation, as well as the harsh detention regime. He was beatified on 31 August 2013.

The statue stands in front of the French Church of the Sacred Heart in Bucharest (Biserica Sacré Coeur), in the square bearing the name of Monsignor Vladimir Ghika, near Aviatorilor Square, where the Monument to the Heroes of the Air is located.

Arhitecți Liliana și Romeo Belea. (With the blessing of the Roman Catholic Metropolitan Archbishop of Bucharest, Ioan Robu, this monument was erected at the initiative of Father Ioan Ciobanu and with the support of churchgoers from the French Church of the Sacred Heart  parish in Bucharest on the 50th anniversary of the death of Monsignor Vladimir Ghika, prince, scholar and priest of the Catholic Church, who spread the evangelical and ecumenical spirit, a preacher of faith, an igniter of hope and an apostle of the love for one’s fellow men, who was persecuted for his loyalty to the church of Christ, and who, upon reaching 81, exhausted by suffering, ended his sacrifice of his earthly life, as a martyr in the Jilava prison on 17 May 1954. His figure remains a symbol of the culture, spirituality and dignity of the Romanian people. Sculptor Gheorghe Anghel. Architects Liliana and Romeo Belea.)

The statue is cast in bronze and portrays Monsignor Ghica in a monk robe, holding a book in his hand and with a grave face that gives out a simple and majestic aura. The statue is mounted on a marble-coated pedestal with four steps at the base. On the back side of the statue is a plaque bearing an inscription with a short history of the monument’s erection.

The statue was erected to commemorate the 50th anniversary of the death of Monsignor Vladimir Ghika, at the initiative of priest Ioan Ciobanu from the French Church of the Sacred Heart. This is a replica of the statue made in plaster in 1939 by sculptor Gheorghe D. Anghel, who had met Vladimir Ghika and received financial support from him for his studies in Paris. In the 1960’s, in the late Communist era, the bronze version of Anghel’s statue was exhibited at the National Art Museum of Romania under the name “The Scholar” without the authorities knowing who was actually embodied by the work. The statue in front of the French Church of the Sacred Heart is the second bronze replica of Gheorghe Anghel’s work and was placed here in 2004. The original plaster statue is found inside the church.

By portraying Monsignor Vladimir Ghika, a martyr of Communist prisons, the statue stands for the struggle for religious freedom carried out by priests, monks or nuns and believers of the Roman Catholic and Greek Catholic Churches during the Communist era. 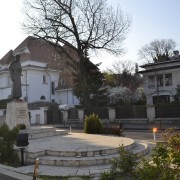 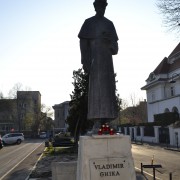 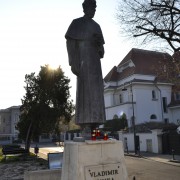 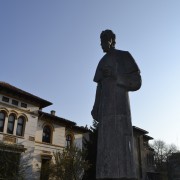 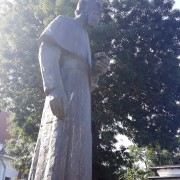 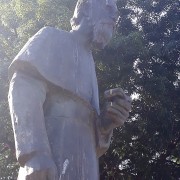 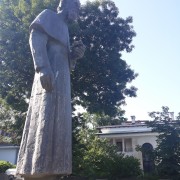 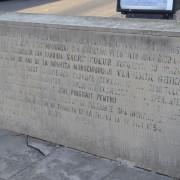